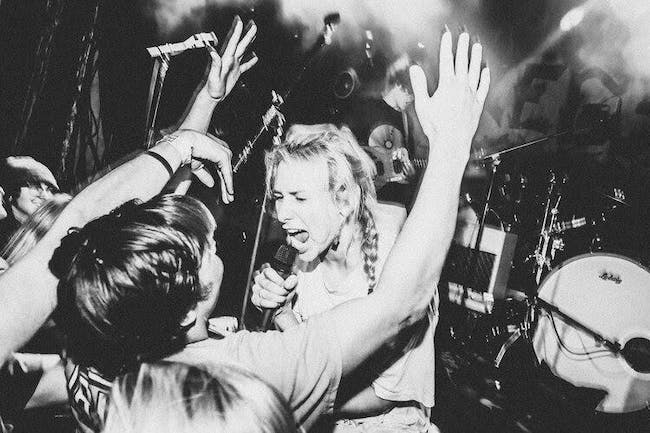 GYMSHORTS is from Rhode Island and like the band’s home state frontwoman Sarah Greenwell is a petite powerhouse that marches to the beat of her own drum. Endearingly rebellious, fiercely independent, and hellbent on causing a commotion, Greenwell embodies the kind of rambunctious unpredictability that has personified some of pop culture’s most legendary troublemakers; a little bit Bart Simpson, a hint of Kevin McCallister, and a dash of Dennis The Menace form the inspirational foundation of

GYMSHORTS’ particular brand of punk n roll, smoked to perfection in the back of Jeff Spicoli’s van.

GYMSHORTS are a sarcastic grin and a pair of bloodshot eyes behind pitch-black Wayfarers in the back row of class, a best friend and a bad influence all rolled into one. GYMSHORTS takes musical cues from a deep well of sources, with touchpoints that range from trailblazing new wave punks The Nerves to sassy turn of the millennium bad girls The Donnas tossed into a creative woodchipper with midcentury surf guitar and wooly, flannel wrapped grunge. The resulting sound is ragged and raw and immediately magnetic, rough and tumble with the kind of lived-in authenticity of a scuffed-up pair of skate shoes. A sturdy platform for the band’s unabashedly unique identity that is equal parts bratty and wise, tightly wound and poised to launch in nearly any direction at a moment’s notice.

Blistering speed and high-octane thrills characterize a GYMSHORTS’ live set, like a juiced-up NASCAR laying a righteous burnout in the winner’s circle, a springy mosh of unbridled exuberance that has earned the band coveted spots supporting Death Valley Girls, Tacocat, La Luz and many others on tours stretching across the globe from Texas to Thailand. As buoyant ambassadors of plucky stick-it-to the-man attitude, GYMSHORTS never fail to leave crowds sweaty and satisfied in the aftermath of a ferocious blitzkrieg bop, decimating eardrums in a whirlwind of maximum volume sonic debauchery with an enthusiastic heart of gold. GYMSHORTS’ catalog is available on Bandcamp and your favorite streaming platforms. Pick up their LPs and 7”s at your local record store and don’t miss an opportunity to party hard with GYMSHORTS when the band comes to your city.