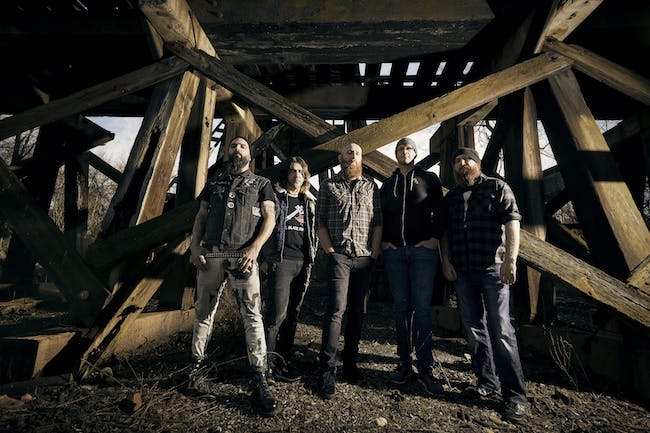 Killswitch Engage first shook the structure of heavy music upon climbing out of snowy industrialized Western Massachusetts in 2000. A musical outlier, the band pioneered a union of thrashed-out European guitar pyrotechnics, East Coast hardcore spirit, on-stage hijinks, and enlightened lyricism that set the pace for what the turn-of-the-century deemed heavy. 2002’s Alive Or Just Breathing became avowed as a definitive album, being named among “The Top 100 Greatest Metal Albums of the Decade” by Decibel and celebrated by everyone from Metal Hammer to Revolver. Not only did they bust open the floodgates for dozens to follow, but they also garnered two GRAMMY® Award nominations in the category of “Best Metal Performance” in 2005 and 2014, respectively, and gold certifications for The End of Heartache [2004] and As Daylight Days [2006]. The group landed three consecutive Top 10 debuts on the Billboard Top 200 with Killswitch Engage [2009], Disarm The Descent [2013], and their career high best bow at #6 with Incarnate [2016]. The latter two releases would also both capture #1 on the Top Rock Albums and Top Hard Rock Albums charts. Their total streams have exceeded half-a-billion to date. Along the way, the boys have shared stages with some of the biggest acts in the world and have sold out countless headline gigs in six continents across the globe.

JB Brubaker [lead guitar], Brent Rambler [rhythm guitar], Matt Greiner [drums], Jake Luhrs [lead vocals], and Dustin Davidson [bass] — released Leveler: 10th Anniversary Edition on May 21st 2021, and are gearing up to take it on the road in September/October. The band re-recorded its fourth album, which was originally released on June 21, 2011, with special guests, brand new guitar solos, alternate tunings, and more. Leveler: 10th Anniversary Edition was produced, mixed, and mastered by Carson Slovak and Grant McFarland at Atrium Audio. The vinyl was mastered by Will Putney.

"Leveler is a record we've always been proud of, and we wanted to do something special for its ten-year anniversary," says Brubaker. "We've done some cool remix projects for previous albums when they've turned 10, but with Leveler, we decided to kick things up a notch. We dove into this record and dissected the songs, rewriting solos, changing the tunings, adding new textures and elements, and got a few of our friends to do some guest spots as well. Our longtime producers Carson Slovak and Grand McFarland handled the recording/mixing and helped us take Leveler to new sonic heights. I think this is the best-sounding ABR record we've ever made, and it's going to allow people to experience the record in a whole new way. I can't wait to share this with everyone.”

Time fortifies the bonds between us. Since emerging in 2018, Light The Torch have grown stronger in lockstep together as a band and as friends. Through this growth, the Los Angeles, CA trio—Howard Jones [vocals], Francesco Artusato [guitar], and Ryan Wombacher [bass]—only enhanced every aspect of their signature sound. Upheld by head-spinning seven-string virtuosity, yet also anchored to skyscraping melodies, the group crafted twelve no-nonsense and no-holds-barred metallic anthems on their 2021 second full-length album, You Will Be The Death of Me [Nuclear Blast].

“The past few years have helped me to become much more personal in my writing,” explains Howard. “Even though I’m kind of a loner, this band became real family. My experiences with Ryan and Fran inside and outside of the band truly bonded us. I think it shows in this album, it truly represents who we are as a group.”

“Every second on this record was thought-out,” adds Fran. “Howard’s performance gives me chills, because it feels so alive. There’s so much emotion in it. I know the guy very well at this point, and our friendship is a big part of Light The Torch.”

That friendship cemented over the course of the past three years. The group shot out of the gate as a contender on their full-length debut, Revival. It bowed at #4 on the Billboard US Independent Albums Chart and at #10 on the Hard Rock Albums Chart in addition to receiving acclaim from Revolver, Outburn, and many more. “Calm Before the Storm” racked up a staggering 14.5 million Spotify streams, while “The Safety of Disbelief” remains one of SiriusXM Octane’s all-time most requested songs. They also crisscrossed North America and Europe on tour with the likes of Trivium, Avatar, In Flames, Ice Nine Kills, Killswitch Engage and August Burns Red to name a few.