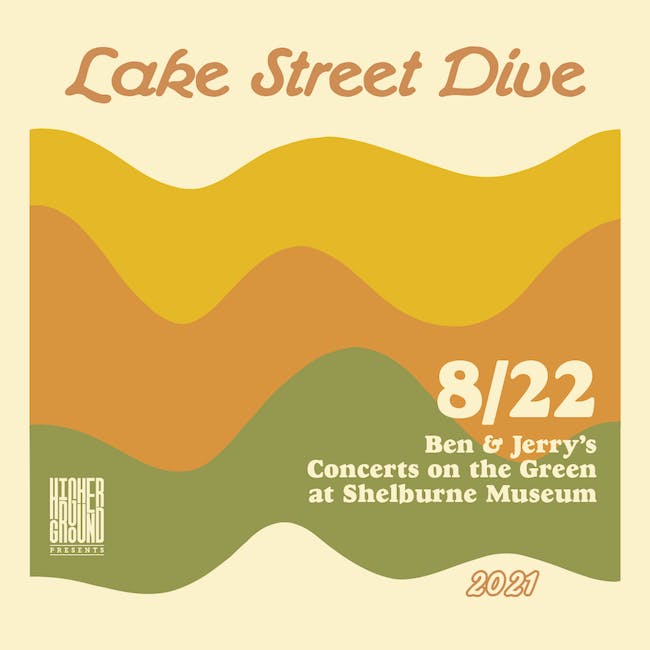 The OFFICIAL TICKET EXCHANGE for Lake Street Dive on The Green at Shelburne Museum on Sunday August 22nd, 2021 is now open.

As a band, Lake Street Dive epitomizes democracy in action: the group, expanded into a quintet since touring keyboardist Akie Bermiss officially joined in 2017, share writing and arrangement duties. Their personalities, skills, and wide-ranging taste in pop, rock, R&B, and jazz have long blended together to make an impressively cohesive sound, both sophisticated and playful, combining retro influences with contemporary attitude. On its most recent Nonesuch album, 2018's Free Yourself Up, the band even produced the record itself.

But, after being on the road for nearly eighteen months since that album, the band members decided they could use some outside help. They had been writing, swapping demos, and rehearsing before and after soundchecks or in backstage green rooms and had amassed a wealth of new material, full songs, and sketches. With more than three dozen new songs and the desire to make a concise, vinyl-length album, they turned to Mike Elizondo, the producer-songwriter-multi- instrumentalist whom Lake Street Dive fans might remember as music director of Chris Thile's public radio series, Live From Here. The Grammy Award-winning Elizondo is perhaps best known as a songwriting collaborator of Dr. Dre, Eminem, and 50 Cent, but he has also served as a record producer for Fiona Apple, Mary J. Blige, Carrie Underwood, and 21 Pilots, among many others. He is as conversant in jazz as in rock, country, bluegrass, and hip hop -- exactly the sort of genre-juggling guy who would appreciate Lake Street Dive's own versatility.

Allison's new album, Outside Child -- that draws water from the dark well of a violent past -- is her first solo offering, she also being a pivotal voice in two bands: Birds of Chicago and Our Native Daughters. And telling her own story sounds now to have made her free -- not from it all, but free within it: to reframe and reclaim her identity and its singular authority.

The songs themselves -- though iron-hard in their concerns -- are exultant: exercising haunted dream like clean bedsheets snapped and hung out into broad daylight, and with the romantic poet's lust for living and audacity of endurance.

Nina Simone comes to mind, as well Edith Piaf: two shamanistic practitioners who turned their faces into the blade of storm and roared back dignity and hope.

This music, no less -- no less -- is a triumph: a courageous work -- burnished and bright; unspeakably beautiful as she sings the unspeakable.

Above all, it is an act of remarkable generosity: a cathartic, soulful, buoyant and redeeming gift to us all and, one must believe, to herself as well.