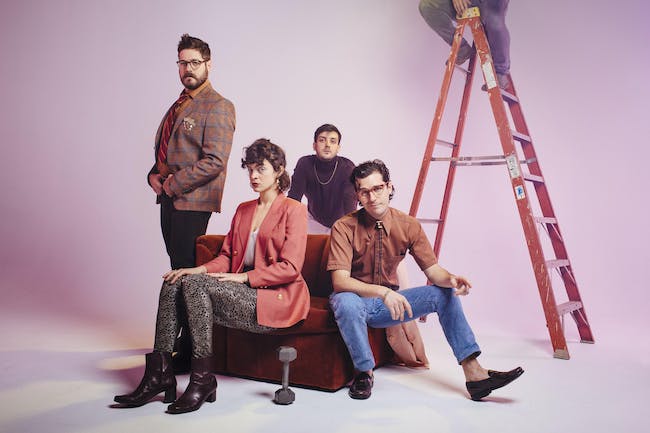 Since making their acclaimed debut with 2013’s Dark Holler Pop, North Carolina-bred four-piece Mipso have captivated audiences with their finely layered vocal harmonies, graceful fluency in the timeless musical traditions of their home state, and a near-telepathic musical connection that makes their live show especially kinetic. On their self-titled sixth album and Rounder Records debut, fiddle player Libby Rodenbough, mandolinist Jacob Sharp, guitarist Joseph Terrell, and bassist Wood Robinson share their most sonically adventurous and lyrically rich work to date, each moment charged with the tension between textural effervescence and an underlying despair about the modern world.

Mainly recorded at Echo Mountain in Asheville, North Carolina, Mipso finds the band joining forces with Sandro Perri (a musician/producer known for his work with acts like Great Lake Swimmers, as well as his own post-rock/experimental-electronic material). In overseeing the production process, Perri guided Mipso toward their goal of shaping a sonic landscape that was expansive and atmospheric yet surprisingly personal, even playful. To that end, the band dreamed up Mipso’s resplendent textures by stretching the limits of their acoustic instruments, rather than employing outside musicians to create new sounds. The result is a body of work with spacious arrangements that gently illuminate the idiosyncratic details and refined musicianship at the heart of every song.

Growing up in Vancouver, BC with his father, Taylor Ashton was always playing with words. “My dad and his friends loved making up little jokes and verses, and they always encouraged me to write. I think my dad was surprised that he had made this little person who was now making things of his own, and his encouragement made me believe I was some kind of poetic genius,” laughs Ashton.

While his childhood poems may have left something to be desired, Ashton’s debut solo album The Romantic, which came out in 2020 on Signature Sounds Recordings, thrilled fans with its satisfyingly clever, yet confessional and intimate songwriting. Ashton primarily accompanies himself on the banjo, and the production on The Romantic is full and lush, and easily at home in the folk-pop world. On his new EP Romanticize, however, the Brooklyn based musician presents re-imaginings of songs from his solo debut, with everything from orchestral inspired string arrangements, to club dance beats and stripped down solo performances, giving us a window into the many avenues of his creativity, and the potential of his songs to transcend the boundaries of genre.

Ashton spent most of late teens and 20s as the frontman of Vancouver-based five-piece Fish & Bird, releasing four albums of heady progressive folk and gracing stages like the Winnipeg Folk fest, the Vancouver Folk Fest, and Glasgow's Celtic Connections festival. But as a Canadian, he felt somewhat trapped by geographical borders. “There is an insane amount of talent in Canada, but I was really excited about all the music happening in the states, and I was frustrated not to be participating”, he explains. After saving up money and going through the complicated Visa process, he made the move to New York City five years ago. “New York was everything I hoped it would be. I was going to mind-blowing shows every night, and meeting all kinds of people who were on missions to make cool music”. One of those people was Grammy-nominated songwriter and guitarist Courtney Hartman, with whom he released a 2018 duo album Been On Your Side. The album is an acoustic, stripped-down affair, which Rolling Stone had to admit, "packs a punch in today's mainstream".