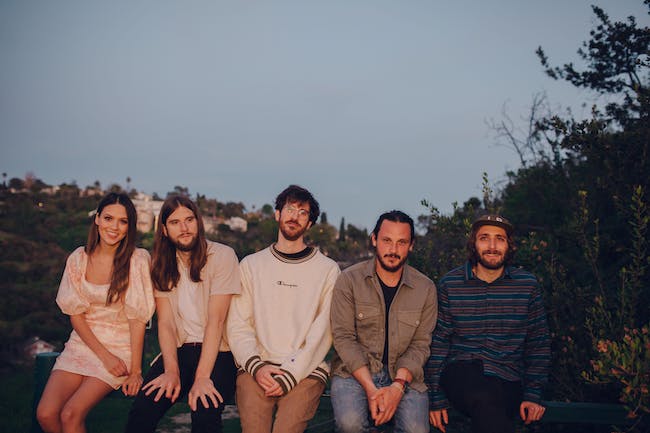 "These dreams are more than paper things," sings Matt Quinn on Mt. Joy's infectious folk-rocker "Astrovan," a warm, yearning bit of road-trip philosophy that posits the existence of a Deadhead Jesus cruising the dusty highways of the countryside, nursing a roach on his way to only He knows where. It's an auspicious line from a band predicated on the revival of teenage dreams.

Mt. Joy started off as a rekindling of shared musical ambitions between Philadelphia high school friends Matt Quinn (vocals, guitar) and Sam Cooper (guitar). Reunited in Los Angeles thanks to the ebbs and flows of adult life, the pair met multi-instrumentalist Michael Byrnes through a Craigslist ad. They named themselves Mt. Joy as an ode to a mountain in Valley Forge National Park near Sam's childhood home, and together, with Byrnes' roommate Caleb Nelson producing, they recorded three songs and sent them out into the world, hoping for the best. "I knew I still wanted to write songs, but the realities of life made that dream seem pretty impossible," Quinn says.

Much to the band's amazement, "Astrovan" accomplished the impossible. Without initial promotion or fanfare, the song took off on Spotify, racking up 5 million streams to date. "The irony of 'Astrovan' was that song was really about being stuck in a life and wanting to have the opportunity to pursue a dream, and in an instant it gave us that opportunity. " Quinn says. Mt. Joy quickly transitioned from a part-time calling into a full-fledged band rounded out by Byrnes on bass, Sotiris Eliopoulos on drums and Jackie Miclau on keyboard.

- One individual photo with Mt. Joy

- Priority entry into the venue

- Priority entry into the venue

There are two stories you can tell as a songwriter: yours or someone else’s. Amy Allen not only tells the stories of some of the biggest artists in the world as a songwriter, but she also shares her story as an artist. By 10-years-old, Amy began writing songs for herself and learned five instruments. After graduating from Berklee College of Music, she founded New York indie upstart band, Amy & The Engine. In 2018, she wrote “Back To You” by Selena Gomez and opened up the floodgates to collaborate with A-list talent, including Halsey, Camila Cabello, Shawn Mendes, Sam Smith, and Harry Styles. Forbes named her on the coveted “30 Under 30” list, while Variety dubbed her “Hitmaker of the Month.” Reclaiming her passion for performing in 2020, she introduced her sound as an artist on her first solo releases for Warner Records. All of her past experience has led her to this point, to creating a collection of personal and meaningful songs that are lived-in tales, reminiscent of the American troubadours that have come before her - heroes like Tom Petty or Sheryl Crow, Carole King or John Prine or Bruce Springsteen. Heralded by these initial song releases and a debut album to follow in 2021, Amy Allen tells her own story now.