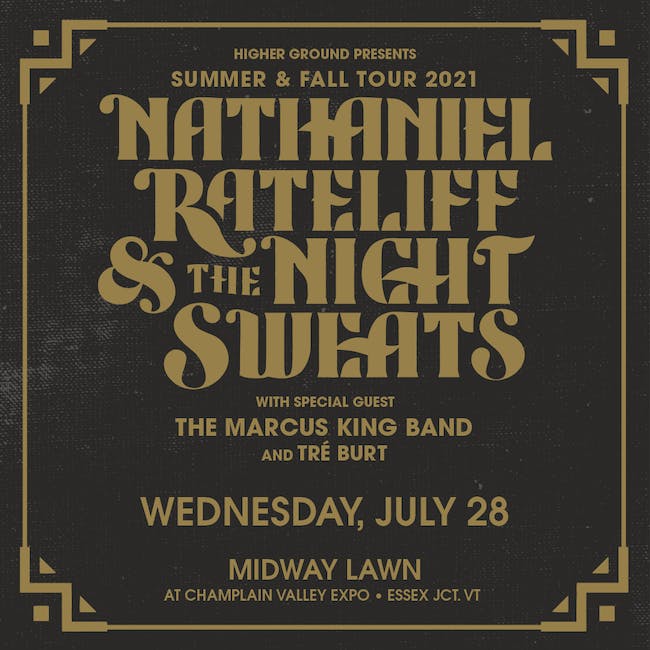 Growing up in rural Missouri, Nathaniel Rateliff got his early music education from his family, who performed in the church band in which Nathaniel played drums. At 19, Rateliff moved to Denver where he worked night shifts at a bottle factory and a trucking company while testing out songs at open-mic nights. Rateliff’s 2010 solo album, In Memory of Loss, propelled him to the forefront of Denver’s tight-knit folk scene, with The New York Times dubbing him “a local folk pop hero” and launched his career as a touring musician. His debut as well as subsequent solo albums continued to receive critical acclaim while Rateliff continued to explore his sound. A set of rough demos recorded in 2013 pointed Rateliff in a new direction, and somewhere between Sam & Dave and The Band, Nathaniel Rateliff & The Night Sweats was born. The band’s self-titled debut album was a breakout success—now certified Gold in the U.S., it has sold over a million records worldwide. Their sophomore album Tearing at the Seams debuted in March 2018 to widespread critical acclaim as well. Last year, Rateliff released his first solo album in seven years via Stax Records. And It’s Still Alright peaked at #3 on iTunes’ “Top Albums” chart, debuted at #1 on Billboard’s “Americana/Folk” chart, landed at #2 on their “Current Rock” chart and resided at #1 on the Americana Albums Chart for eight consecutive weeks. Rateliff has appeared on every late night television program and recently made his debut on “Saturday Night Live” performing his latest single “Redemption,” which was written for and featured in the Apple Original film, Palmer, starring Justin Timberlake. Rateliff has toured extensively worldwide, playing major festivals and selling out iconic venues including their hometown Red Rocks Amphitheater multiple times. In 2018, Rateliff also launched a Denver-based foundation called The Marigold Project to support community and nonprofit organizations working on issues of economic and social justice.