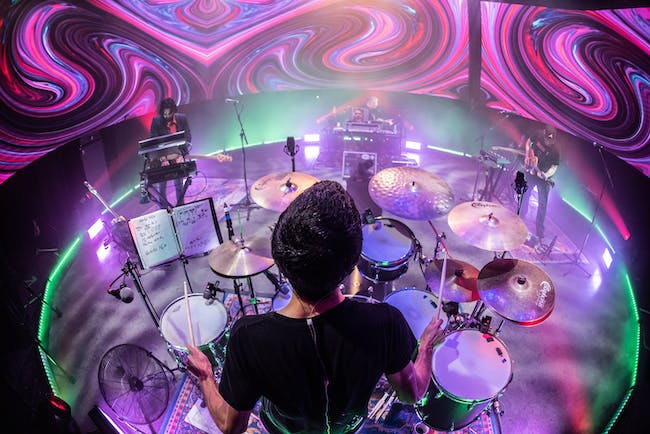 Perpetual Groove was founded in Savannah, GA, in 1997 before relocating in 2005 to Athens, Georgia, a town long renowned for its thriving music scene. PGroove comprises founding and current members: Brock Butler on guitar and lead vocals; Adam Perry on bass guitar; and Matthew McDonald on keyboards and vocals. Drummer Albert Suttle joined the band in 2001 but has announced his departure culminating with the 2021 NYE show. Replacing him on drums will be Darren Stanley (Jimmy Herring, Col. Bruce Hampton).

PGroove, a band categorized by fans as “Trance Arena Rock,” is an amalgamation of rock and indie electronica, with a touch of metal thrown in for good measure. With their intelligent light show and experimental stage set up, PGroove continues to create a cultivated, unique experience for each live show. Since their inception, the band has toured the U.S., and performed in Japan and Amsterdam and Jam Cruise. In 2013, PGroove went on 2 year hiatus but caught everyone by surprise in 2015 when they returned to the stage. In 2019, they released a new recording, the eponymous Perpetual Groove, delighting fans with a new sound by the reinvigorated group.

PGroove released a 4-song EP entitled “C’mon. Covers?” on September 17, 2021, featuring songs by Peter Gabriel, The Cars, The Go-Go’s and Johnny Cash. The EP was recorded at Chase Park Transduction (R.E.M, Drive-By Truckers, Bettye Lavette) in Athens. It was produced by Jason Kingsland (Band of Horses, Belle and Sebastian). The recording ensemble included Butler, Perry, McDonald and Stanley. Listen to the EP on Youtube here.

PGroove is also delighted to announce the return of their multi-day festival, Amberland. Ten years after the 2012 edition, Amberland 2022 will take place over Memorial Day weekend at its new home, Woodlands Nature Reserve, in Charleston, S.C.