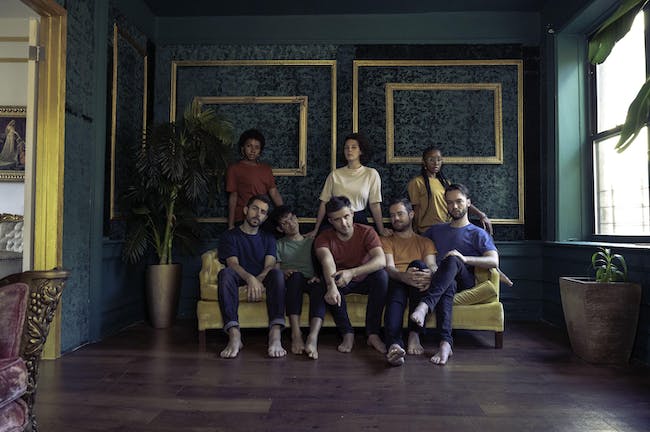 The OFFICIAL TICKET EXCHANGE for SAMMY RAE & THE FRIENDS on Friday, October 15, 2021 is now open.

For as much as Sammy Rae & The Friends may be a band, this collective of eight musicians, dreamers, and artists considers itself a family first.

Fronted by singer and songwriter Sammy Rae, the group flourishes in any spotlight with a combination of all-for-one and one-for-all camaraderie, palpable chemistry, deft virtuosity, and vocal fireworks. Their sound is a mélange of Sammy’s influences, rooted in classic rock, folk, and funk and sprinkled with soul and jazz. Complete with a rhythm section, horn section, keyboards, and two backup singers, Sammy Rae & The Friends have delivered their high-energy, spirited and unrestrained shows to sold-out audiences in the Northeast and beyond, including New York City’s Le Poisson Rouge, Boston’s The Sinclair, Burlington’s Higher Ground and Chicago’s Schubas. After packing houses and racking up 15 million-plus streams, the band welcomes everyone into this family on the 2021 EP, Let’s Throw A Party [Nettwerk].

“Because we come from so many different spaces and studies of music, we’re able to create something very unique,” Sammy states. “We learn from one another as we’re playing together. We’re grateful to have found people who speak the same language, but also speak their own. We have a vision for longevity. The only way that works is if we behave as a family. We’re all very grateful to have the support of one another. This is a large group of people where everyone plays an important role. It’s the lunch table I always wanted as a kid.”

Sammy Rae & The Friends built this kind of trust one show at a time. As the story goes, our fearless leader grew up in Derby, CT, learned piano, and penned her first crop of songs at just 12-years-old. Under the spell of everyone from Queen to Ella Fitzgerald to Bruce Springsteen, she honed her voice. By high school, she cut her teeth in local venues, even releasing a series of independent solo records before college. New York eventually called to the songstress as she enrolled in Manhattan College during 2013. Toughing it out tooth and nail in The Big Apple, she left college in 2014 to pursue music full-time and threw down at countless gigs while continuing to write and record at a prolific pace. At the same time, crowds doubled with every rapturous performance as they built an inclusive safe space for fans everywhere.

Meanwhile, the single “Kick It To Me” eclipsed 3.7 million Spotify streams as “Talk It Up” and “The Feeling” also each surpassed the 2 million mark.

The unit only grew stronger.

Scattered across the country at various universities, Couch tackled the challenges of being a “long-distance” band, writing and even recording virtually for the past three years. Despite these challenges, they celebrated the release of their debut EP, “COUCH,” in February 2021. The band injects each track with their signature flavor: expressive horns, warm vocals, and bubbling synths—crafting an oasis of joy for musicians and non-musicians alike.