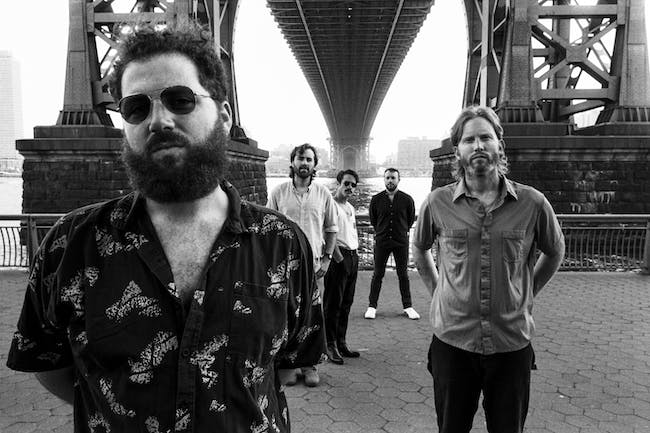 They say it takes nearly a decade for a wine to mature. The same could be said for The RT’s (formerly The Rad Trads). If you caught their brand of raucous, beer-soaked trad jazz and blues in the early days, you‘ll see the same ingredients (boisterous horns, impassioned vocals, and a driving groove) but a new flavor, and the kind of maturity and subtlety that only comes with time.

That’s why it felt like the right moment to change the band’s name, Patrick Sargent (vocals, saxophone, keys) explains:

“We made this album that felt more authentic and honest than anything we’d ever done, but it didn’t sound like a record by a band called The Rad Trads. So it only felt right to take ownership of this next step in our evolution and abbreviate the name.”

Their forthcoming self-titled album – out Oct 22 – celebrates these changes. While the world was going through difficult times in 2020, the band – Sargent, Michael Harlen (bass, vocals); Alden Harris-McCoy (guitar, vocals); Michael Fatum (trumpet, vocals) and Jamie Eblen (drums) – took the opportunity of downtime to produce new material. They were able to find solace in a greater collaborative energy and discovered a new creative process.

“This record was different from our previous records in that the arrangements were made for the studio,” Harlen explains. “In the past, our tunes would reveal themselves on the road; learning and tweaking them as we played in different rooms each night. Then, when we got into the studio, we would record a version pretty faithful to what we would have played the night before in a bar. But this time around our producer Chris Peck encouraged us to really focus on pre-production and to approach the arrangements through a studio lens. The result is less about raw energy and more about finesse.”

Peck (Christopher Paul Stelling, Michelle Wake, Shoney Lamar), who firstworked with the band mixing On Tap (2018) and then producing See You Again(2020), notes, “With each successive recording, these guys peel away at thebarrier between them and their potential. The writing keeps getting better. Themusicianship keeps evolving. The trust between them grows. When we started,they were obviously an impressive live band and they approached recording asa way to capture their on-stage energy. But the more we explored the studio asan instrument, the more they discovered new, undeveloped ground. Theystarted taking new risks, making bolder choices, and this has proved to betransformational. They have become unbounded by their conceptions of theirown work and moved closer and closer to a unique, collaborative voice. Morethan ever, they seem to work as a unit, taking responsibility for each other’scontributions. They nurture and support each other, selflessly entering into aprocess that brings out the best in all of them.”

Still, the album’s first single “Need You Right Now,” a punky staple of their prepandemic touring repertoire given the same genre-bending, post-modernupdate that prompted the name change in the first place, is a reminder that TheRT’s remain the band that many audiences have danced to all over the globewith its rubbery bass line, seductive groove, and infectious energy.

Charged with a new enthusiasm, the members of The RT’s are ecstatic to beback in front of crowds, playing all new music from their 2020 record See YouAgain and the upcoming release, The RT’s.

Peck describes a phone call with the band on the road for the first time since thepandemic began: “The positive energy and camaraderie was spilling out overthe phone. They described paying attention to their set in new ways; respondingto the crowds in ways they hadn’t before. They are hitting a stride, clearlyconfident and following their instincts. This makes me so happy. It seems asthough they have figured out something about themselves that has reawakenedin them new reasons to do what they do. They are excited and proud of theirmusic like never before. I am in awe of them. I believe their best work is aheadof them and I cannot wait to see what happens next.”

“There is nothing like playing our music together on stage,” Eblen says.“Audiences all over missed it just as much as we did and it feels damn good tobe exchanging that energy again.”