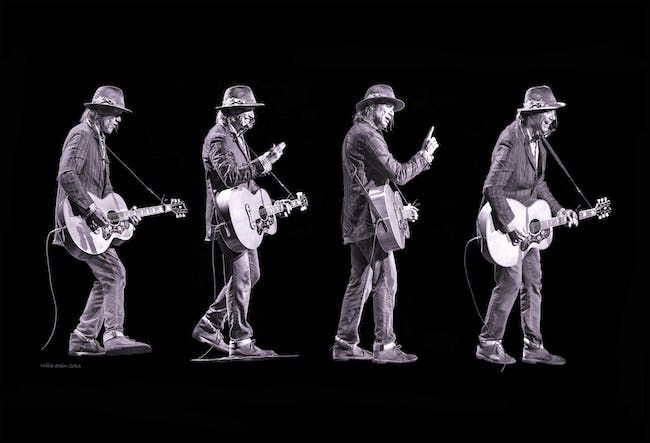 You don’t often hear about an artist reinventing their sound twenty albums into a celebrated career. But for Todd Snider, his latest release, First Agnostic Church of Hope and Wonder, isn’t so much a sudden change in direction as an arrival after years of searching.

Since debuting in 1994, Snider has gone through his own incarnations. His first single “Talking Seattle Blues” was a head fake that might’ve pointed to goofy novelty songs. But he quickly showed that his artistic quiver was much deeper and more interesting. A storyteller who works a similar creative soil to John Prine and Shel Silverstein, Snider’s best songs are both sad and funny, political and entertaining, and always written with a poet’s eye and a stand-up comedian’s sensibility about the follies of human condition.

While he’s made twenty fine albums, it’s on stage where Snider is even more potent, with between-song banter that weaves subtle emotional threads through his sets. A road dog who loves the road, Snider has toured with Emmylou Harris, John Prine, Jimmy Buffett, and appeared at festivals like Farm Aid, Newport Folk Fest, Lockn’ and Telluride Bluegrass Festival.

The other key framing device for the new songs is the album’s colorful title. “If the gods of folk didn’t want no funk, they shouldn’t have started none,” Snider says with a chuckle. “2020 was a terrible year, and it kept taking people that I loved. So I kept feeling funky, and the church idea came out of that. I’ve always had the First Agnostic Church of Hope and Wonder in mind. Aren’t we always hoping for something and wondering ‘What the fuck?’ We hope there’s a God. We wonder if there is. We hope you’re coming. We wonder if you will.”

“I started realizing because I had this church, in my mind, that I could make up different kinds of songs,” he continues. “I don’t usually like bossy kinds of songs, where someone tells you to breathe. Me and Neal Casal used to say, I don’t have to know when to fold ‘em. I don’t have to live like I’m dying.’ I’m always telling the radio when I’m listening to it, ‘No, I don’t!’ But this is a reverend thing. I have a reverend license. I married Jason Isbell and Amanda Shires, and my tour manager and his wife. So it just felt like this natural thing for it to be on Sunday mornings where I can do like these pseudo-sermons.”

He playfully undermines typical sermon themes like faith can move mountains - on “Turn Me Loose (I’ll Never Be the Same”), he reckons “Mountains can get around just fine on their own - and finding meaning on mystical sojourns - “Oh, shit, I quit my job,” the truth seeker on “The Get Together” realizes in a panic. “The record is the story of a preacher who starts this church that is total bullshit,” Todd says. “People start giving him money anyway, but then they start asking him questions. So then he prays to God and God helps him. But the moral of the story is that God’s hilarious.”

It feels appropriate that with his latest album, Snider may play a similar inspirational role for the parishioners in his church. “I’d like it to feel like a drum circle or a revival for listeners. I’d like it to feel like a hippie summer, where you take acid and listen to the songs by a beautiful lake. There’s a thing called effervescence - that feeling that you’re present, alive. I’d like for people to have a moment with this record. I think about records that will come into my life and they’ll help put a little more salt on the moment.

That’s what I’m going for. But then, who knows if anyone will like the record. I dig it. I know it’s a cliché for people to say, ‘This is how I’ve been meaning to sound forever.’

But I swear, that’s how it feels.”