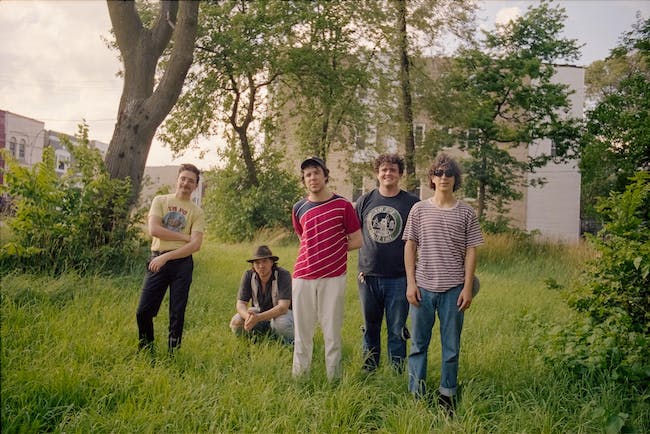 Chicago’s Twin Peaks have gleefully embraced change ever since their 2010 formation to become one of the city’s most essential rock bands. With their fourth album Lookout Low, the sonic and creative leap the five-piece takes feels like a total revolution in their youthful sound. The 10-track effort was recorded and cut live over three weeks in Wales with legendary producer Ethan Johns. Thanks to the band’s dedicated approach to rehearsing and demoing out their material before hitting the studio, the songs burst with life and the undeniable magic of their live show.

2016's Down In Heaven connected with audiences in a big way, seeing the band taking over late night on CONAN, while landing festival slots at Lollapalooza, Bonnaroo & Coachella, and tours supporting luminaries like Spoon, Cage The Elephant, and Wilco.

“The Lamb was written during a time of intense paranoia after a home invasion, deaths of loved ones and general violence around me and my friends,” says Lillie West, the Chicago-based songwriter behind Lala Lala. “I began to frequently and vividly imagine the end of the world, eventually becoming too frightened to leave my house. This led me to spend a lot of time examining my relationships and the choices I’d made, often wondering if they were correct and/or kind.”

West initially started Lala Lala as a way to communicate things that she felt she could never say out loud. But on The Lamb, her sophomore LP and debut for Hardly Art, she has found strength in vulnerability. Through bracing hooks and sharp lyrics, the 24-year-old songwriter and guitarist illustrates a nuanced look on her own adulthood—her fraught insecurity, struggles with addiction, and the loss of several people close to her.

Originally from London, West moved with her family to Los Angeles, where she spent her teenage years, and later to Chicago, where she enrolled at the School of the Art Institute of Chicago. Inspired by those cities’ DIY music communities, she started Lala Lala as an outlet where she could process her new experiences, which often involved toxic relationships and partying around the city with beloved friends. The turbulence in West’s life throughout that period resulted in an abrasive but tender debut album, Sleepyhead (self-released, 2016). West decided to quit drinking, and she began booking her own DIY tours across the country. Sobriety provided her with a newfound sense of self and clarity, and she began writing the songs for The Lamb while also starting the process of re-learning how to live her life.

Already celebrated as the “Heart of Chicago’s Music Community” (Noisey) by both fans and tastemakers alike, OHMME (aka the duo of Sima Cunningham and Macie Stewart) amalgamate the aggressive and the meditative on their bold debut full-length album, Parts.

Still in their 20s, Stewart and Cunningham are both classically trained musicians and are established players within the Chicago music scene. They are especially involved in performing and working for venues within the local experimental music scene. They’re constant collaborators and have recorded and toured with homegrown acts as varied as Tweedy, Whitney, Chance The Rapper and Twin Peaks.

Cunningham and Stewart are multi-instrumentalist, singer-songwriters with a penchant for two instruments in particular. “The band started because we knew we could sing well together and we wanted to make some noise with the guitar,” says Cunningham. Stewart elaborates, “Sima and I are both trained classical pianists and we know many of the sonic spaces keyboards have to offer. Since we were interested in experimenting and creating something different from what we had both done in the past, we chose guitar as our outlet for this band. We wanted to create both new and uncomfortable parameters for ourselves to force us into a different creative space.” These guitar-heavy experiments are sometimes earthy and resounding, at other times shimmering and buzzing—swirling around the duo’s expertly crafted vocals while creating a chaotic bed of harmony. Cunningham’s smoky alto complements Stewart’s higher-register croon, all underpinned by the restrained yet highly inventive polyrhythmic percussion of drummer Matt Carroll. Think Amber Coffman and Angel Deradoorian-era Dirty Projectors.