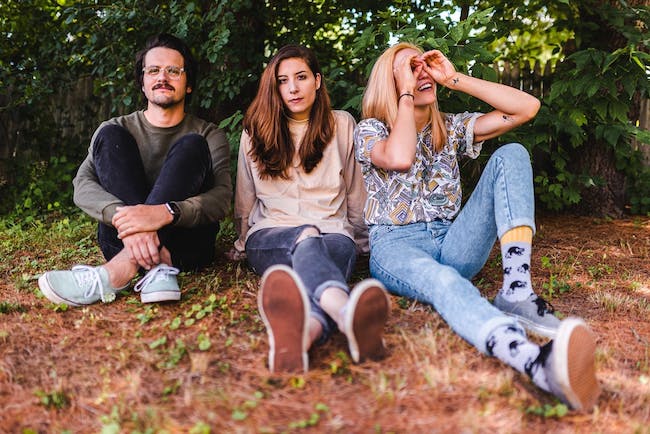 Common Blah is the debut full-length by Portland, Maine’s Weakened Friends. Founded by songwriter Sonia Sturino, bassist Annie Hoffman, and drummer Cam Jones in 2015, the trio is a low pressure outlet for emotionally volatile music. Engineered and produced by Hoffman and perfected over the last year, the record broadcasts heavy feelings amid screech and feedback with little more than a distortion pedal the clog up the signal chain.

For Sturino, writing in Weakened Friends is more of a physical process than a mental one.

“I have to feel the vibration or sound coming out of my body. I need the physicality to do it, to enjoy singing it,” she says. “People probably hear the vocals and think, ‘she just puts on that weird voice,’ but it’s really just what comes out. It’s my body making that sound.”

Many of the songs reckon with deep mid-20s malaise — with the feeling of being young, stuck, and settling for less. “Sometimes, things look good on the outside, but they’re not working. That’s how it used to be for me. I’d hear, ‘You have a really cool job. You live in a cool city. Your band is cool.’ It was ‘Common Blah’ though because I was miserable. I didn’t care. Now, I’m at the other end of the spectrum. People do something that they think they’re supposed to do when it’s not what they should be doing and it doesn’t make them happy. In a lot of ways, this is the first time I’ve found happiness. I wrote the lyrics about the time before that happiness.”

On Common Blah, Weakened Friends use volume — instrumental and emotional — to reassert a sense of control in a time when daily life has slid out of tune. The album also features guest shredding by peer and kindred spirit J Mascis on the song “Hate Mail.” Common Blah will be out on CD, LP, and digital download via Don Giovanni Records on October 19th.