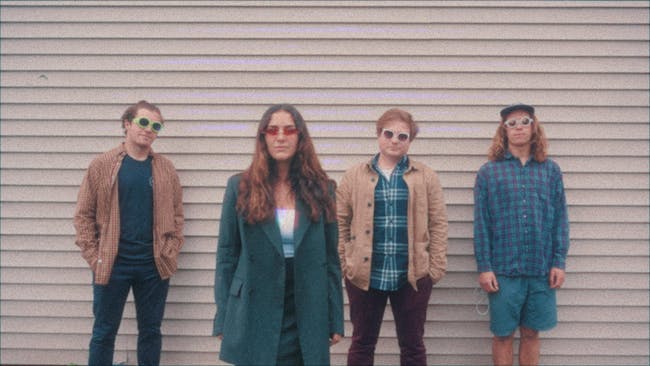 The band yarn. was born out of a single phrase: “wait man, jot that down.” Guitarists Liam Manion and Sawyer Bush began playing together in 2018 in a college dorm room, with painted Washburn acoustic guitars and incense burning in the background. Inspired by the crumbling, under-maintained walls around them, they wrote songs that captured the often understated minutiae and isolation of college life. The tattered notebook from Manion’s childhood slowly overflowed with want-to-be poetry, complemented by Bush’s bluesy stylings and musical intuition.

The duo performed shows at colleges and open mics around the area before connecting with singer and a cappella superstar Sophia Calder. Her voice, reminiscent of neo-jazz artists like Norah Jones and Donna Missal, presented the missing piece to their puzzle. In the end of 2020, along with bassist Eden Forbes and drummer Miles Schulman, they established the name yarn. and continued to play shows together, but this time with a fully defined roster. The chemistry immediately clicked, and the band was inspired to take the next step forward with their music. They recorded a series of songs in basements remotely, the first of which, “Pretty Girls” was released on March 26, 2021.

Since then, they have played shows throughout New York and New England, building a strong community of "cat-rockers" along the way. They are currently in the process of recording their debut EP I Said Goodbye And Then, set to release this fall.

Pattern Addict is an alternative rock group based out of Burlington, Vermont. Described as, "a truly eclectic mix of focused songwriting and tasteful, colorful arrangements that combine to create a nuanced take on indie rock" by Seven Days Newspaper, they take inspiration from a variety of genres including the widespread alternative movement in the 1990s and 2000s, indie and folk acoustic roots, and a series of jamband/post-rock groups. They began headlining shows in the Burlington area leading up to the release of their first album in March of 2018. The band just released their second album, "Someday, Some Afternoon," a 12 track arrangement on which they dive deeper into their separate, unique elements. Listen now on Spotify, AppleMusic, or any other major music streaming platform!

The Rose McCann Band is a bluesy-Jazz rock duo comprised of Ben Collins and Emma Downie. The music of RMB is a churning, hearty fire. The sheer humanity so tirelessly poured in their tunes are for your dew-wicked spring mornings, endless summer days with friends, and your darkest, coziest winter nights. Sheer heart and soul. RMB has become a staple of the UVM and Burlington house party scene. Come see Collins and Downie play their music, joined by a 7 piece band and countless friends in the crowd.