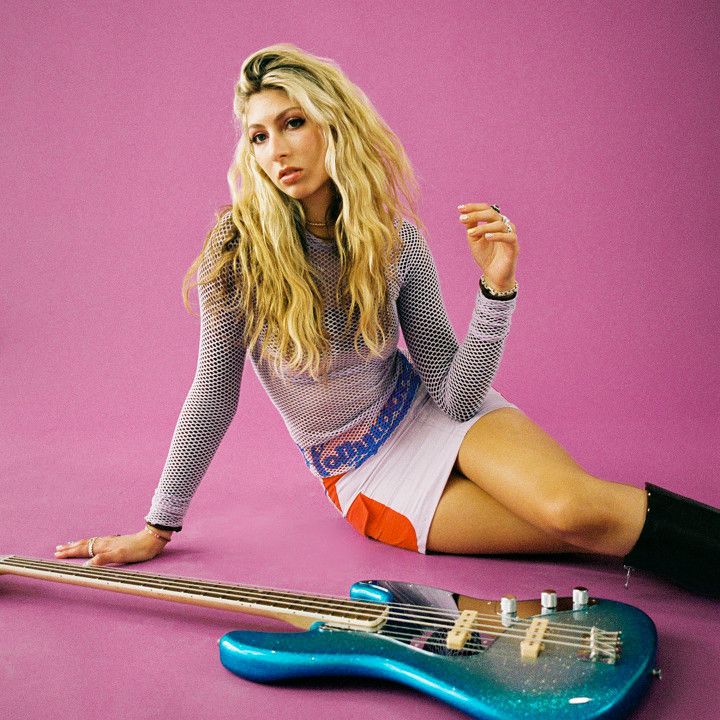 *Please note that the meet & greet add-on does not include a GA ticket. This must be purchased separately.

Bass prodigy and burgeoning pop icon Blu DeTiger was born and raised in NYC. Drawn to the bass early on, she took the stage at CBGB, prior to the iconic club’s closing, when she was only seven. By 17, she was a staple in the city’s creative scene. While playing in a multitude of bands, she also distinguished herself as a DJ, playing live bass during her sets and getting the crowd dancing, whether at a techno rave in Brooklyn or a high-profile fashion event. Blu attended NYU Tisch Clive Davis for two years. By early 2020, while also writing and producing her own music, Blu was cutting her teeth touring around the world with a variety of artists. Blu released her debut EP in 2020, and has since racked up over 120 million global streams to date.

In April 2020, her breakthrough single “Figure It Out” – which was featured on her independent debut EP How Did We Get Here? and charted at AAA and Alternative radio – went viral in 31 territories, made NPR Music’s Top 40 Songs of the Year, and earned attention from i-D, Paper, Variety, Billboard, Rolling Stone, among many others. Now signed to Capitol Records, Blu recently released the irresistible “Hot Crush Lover” and collaborations with Chromeo and Biig Piig.

Following her 2022 show at Red Rocks Amphitheatre with Chromeo, Blu played sets at some of the biggest summer festivals, including Bonnaroo, Governors Ball, Hangout Festival and Okeechobee. She’s also toured opening for Jungle, and done sold out headline tours in the US, Europe and UK this year. Blu will kick off an extensive North American headline tour in the fall of 2022.

Blu’s undeniable bass talent is consistently sought after. You can often find her shredding as a special guest for artists, friends, and collaborators, or adding her bass playing to records. Blu has performed with Dominic Fike, Caroline Polachek, Chromeo, Bleachers, and Fletcher to name a few. After catching Jack Antonoff’s eye, she played “Saturday Night Live” with Bleachers and joined him at Bonnaroo’s Superjam. She was one of the special guests in Olivia Rodrigo’s “Driving Home 2 U” film on Disney+, and has garnered attention from many industry legends, including Timbaland, Janet Jackson and Questlove.

She has over 1.2 million TikTok followers to date — largely due to her bass videos that have inspired so many to take up the instrument themselves. Her musicianship and inspiring personality have been spotlighted in campaigns for such brands as DKNY, Levi’s, Smashbox, American Eagle. A member of Fender’s Next Class of 2021, she was also tapped to star in the campaign for Fender’s new Player Plus series. Blu was on the cover of Bass Player Magazine and is working closely with Fender for many more upcoming projects.

Along the way, she’s developed a large and loyal “bass army” of bass players and aspiring musicians that includes many young girls, Blu responds to as many DMs as time permits, offering advice, support and positivity. She’s a role model, inspiring a new type of community.