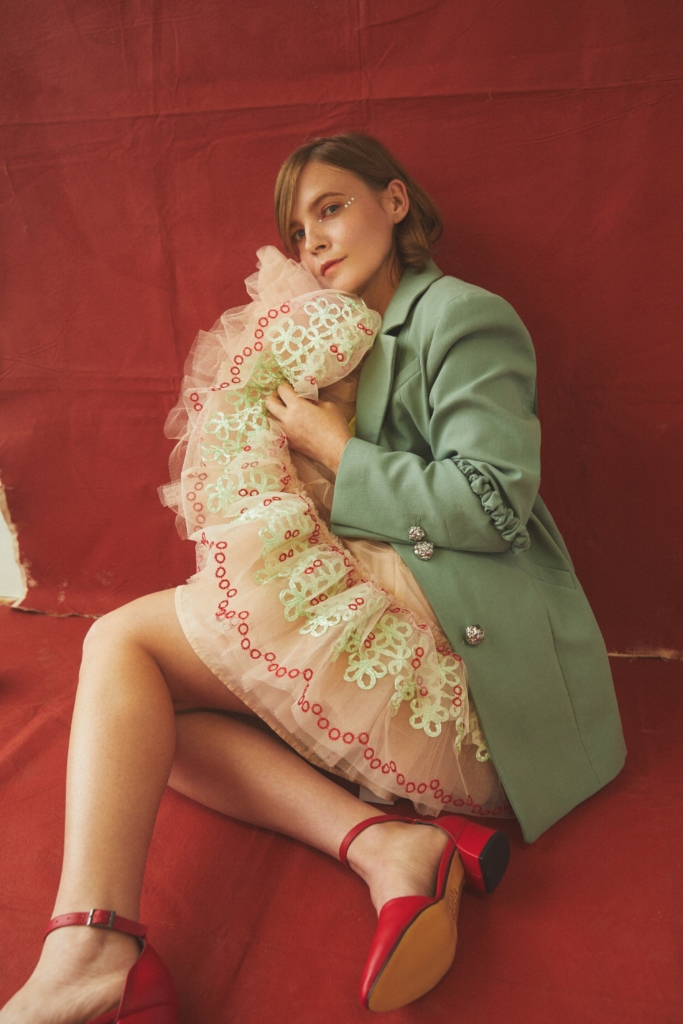 On the honey shores of Cape Cod in a beach shack, Courtney Marie Andrews found self-love and her voice.  Every morning, she’d walk 6-8 miles around the back trails of an island and meditate on her life, perusing old memories and patterns like browsing a used bookshop. That summer of introspection led her to a joyous sense of beginnings and ends. When she let love for herself in, she therein let the outside love in, too—the summer feeling, the swaying cypress, the full moon, and the possibility of healthy love. This phase came only right after one of her darkest, though, where being alone with oneself was the most terrifying thing you could do. After more than a decade on the road, the Phoenix-born songwriter, poet, and painter finally had the space to process all the highs and lows of a life of constants. She was finally ready to make a record of triumph, while not completely forgetting the years that made her.

That record is Loose Future.

After committing to penning a song a day, Courtney found the sounds of summer flowing through her writing—the romance, and possibility, and the free sounds. Collecting an album’s worth of material, she tied up some loose ends in Bisbee, Arizona, her “soul place” and beckoned Sam Evian to come and produce a record. Her guideposts were lots of harmonies and alternative percussion. The rest was pure exploration. At Flying Cloud Recordings in New York, she dipped in the creek every morning before proceeding. She wanted to embody the feeling of letting love in. Taking the dip is what letting love in feels like. Sometimes you plunge, and sometimes you walk slowly in.

This summer feeling materializes on the first single “Satellite” where her shimmering vocals orbit delicate acoustic guitar, a soft beat, and buzzing intergalactic synths. As if bottling rays of July sun, it glows with the affirmation, “I like to see you shine—my favorite piece of the sky.”

“I’ve written a lot of love songs, but there’s always a tinge of heartbreak,” she explains. “I wanted to write a love song with no caveats, which I’ve never allowed myself to do. A satellite is so mysterious to the average person. It’s the idea somebody is floating around your mind. You’re not quite sure why, but you like it.”

Then, there’s “I’ll Be Thinkin On You.” A bombastic beat echoes as an organ underscores her lovestruck delivery as she rethinks the whole concept of “missing” the one you love. “I fell in love with someone,” she goes on. “Instead of saying, ‘I’ll be missing you,’ we’d say, ‘I’ll be thinking on you’. When you’re ‘thinking on’ somebody, it means this person is on your mind and not absent.”

The opener and title track “Loose Future” embodies the core of the album’s message. Her voice rings out through a guitar amp pedal as off-kilter bass lines thump with lush guitar, mirroring the ebb and flow of her constant self-work to reach this point creatively, personally, and spiritually.

“The future is loose,” she notes. “I’m not in denial of the darkness, but I’m trying to allow self-love and acceptance to grow in my life. I’m not covering up the dark either, because we have to fight it constantly. We can welcome goodness and love into our lives to shine on these pockets of darkness.”

“Older Now” blossoms like a sunflower in summer, basking in the long days and enjoying a reprieve from a winter that had long outstayed its welcome.

“I wrote it right after I’d gone on my first date after being single for a long time,” she reveals. “I’m older now and wanted to become a better version of myself. I’m also realizing there are parts of myself that will never change. There are inherent personality traits that feel unchangeable and are imprinted in my DNA. I’m accepting I’m not this textbook version of a person. ‘Older Now’ is a huge representation of the change. I’m ready to not live out familiar patterns of being heartbroken for the sake of being heartbroken.”

Strings and soft guitar stitch together a moody sonic patchwork for “On The Line” as she asks, “Why do I give you the satisfaction of knowing I still care?” Reaching the physical and spiritual apex of summer romance, stark piano and a smoky beat brush up against her dynamic delivery on the rapturous finale “Me and Jerry,” which breaks down simply as “a song about good sex that transcends the physical realm.” Emblematic of her uncanny ability to draw the otherworldly from simplicity,the ethereal “Let Her Go” dreams of “a person who is so free, autonomous, and wonderfully themselves that everybody falls in love with this person.”

Loose Future ultimately represents a high watermark of her unbelievable journey thus far. Committing her life to music from a young age, playing in punk bands in high school before becoming a touring member of Jimmy Eat World at just 18 years old, Courtney went on to release a series of acclaimed albums. She garnered her first GRAMMY® Award nomination in the category of “Best Americana Album” for 2020’s Old Flowers. Meanwhile, the record closed out 2020 on year-end lists from Good Morning America, Magnet, and Uncut. The New York Times  raved, “Courtney Marie Andrews’s luminous new album, ‘Old Flowers,’ anatomizes the aftermath of breaking up: loneliness, bittersweet memories, recriminations, regrets, temptations, lessons of experience.” Highlighting “Burlap String,” Rolling Stone claimed, “Driven by acoustic guitar, the song brings to mind classic Bob Dylan and Joni Mitchell, but Andrews’ bell-clear voice and fearless message of introspection are unmistakably her own.” Of the album, Stereogum attested, “up front in all of it is Andrews’ voice, wringing beauty out of pain and self-realization.” Along the way, she also unveiled her debut poetry collection, Old Monarch.

“When you listen to me, I hope you feel good,” she leaves off. “I spent so much of my career relating to the brokenhearted. There will always be that side of me. With this record, I hope you feel love on multiple levels. It doesn’t have to be romantic; it could just be self-love or hope. I’ve come into the full spectrum of my own creativity and selfhood. I want to keep continuing exploring that forever against the backdrop of summer.”