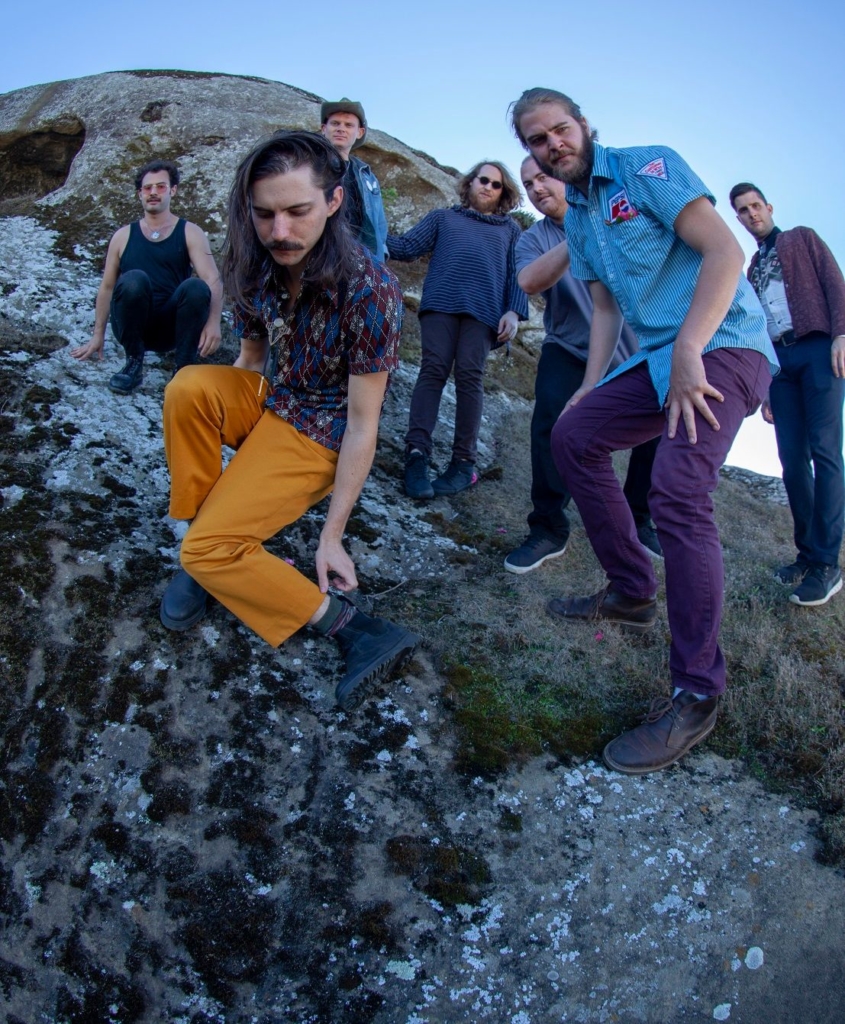 Evolfo is the sound that breaks through the fuzz on the low end of your radio dial and echoes out the back door of a pink neon lit bar. Mainstays of New York City’s clubs and DIY spaces, as well as the finest basement venues coast to coast, Evolfo has cut adventurous tracks through the U.S., gaining initiates and devotees every time they cram onto a stage and deliver their raucous live show. Last of the Acid Cowboys, the band’s debut LP, melts down decades worth of eclectic and bizarro records and puts on wax a house shaking mix of garage rock, psych soul, spiritual funk and ecstatic freakout. Like the faithful crate-diggers who have come before them, Evolfo mined the past for sounds and grooves that history left on the shelf. When they breathe their smoke into these forms, it produces something new.

“The process of writing and recording Last of the Acid Cowboys was a lot of unlearning for me. My main focus was trying to reconnect with the untainted excitement I had for music as a teenager. Every artist I look up to defies categorization and I think that’s because they all concern themselves solely with making the music, and not labeling it from the get go,” said keyboardist and vocalist Rafferty Swink. “It might sound obvious, but these limitations are hammered into your head as an unknown artist and it’s only after you put both middle fingers up that you can make something real.”

With a guitar sound soaked in the gunk that drips down from an elevated subway train and a fire-breathing horn section, this Brooklyn septet plays garage-soul with the force of the Devil’s belly laugh and the groove of a New Orleans second line. They’re The Stooges playing along to Bitches Brew; Shuggie Otis soundtracking a Spaghetti Western; “Louie Louie” and a bottle of champagne.

In 2011 the rag tag group of seven music students, representing both coasts and the Great Midwest, came together in Boston, MA. They originally called themselves Evolfo Doofeht, a reversal of “the food of love,” Shakespeare’s famous description of music from “Twelfth Night.” Headed by guitarist and vocalist Matt Gibbs, the band had one goal: play with energy and bombast. They cut their teeth on the basement party circuit and earned a reputation for playing bacchanalian live shows. The crew wrote songs about gypsies and demons and quickly became local favorites, netting a Boston Music Award and inspiring Sound of Boston to proclaim “It’s hard, almost impossible, to listen to Evolfo Doofeht without feeling the urge to dance.” Now these boys are young men, they’ve traded Boston for Brooklyn, and they’re simply called, Evolfo.

In a few short years together, Evolfo have drawn the attention of indie rock tastemakers with their songs being selected for several films and television shows, inclusion on Spotify playlists and praise from media outlets like Impose Magazine who declared, “you fall into the depths of the lyrics within seconds,” and Speak Into My Good Eye who called the band, “raucous, dark, sinister, with a warm-psych-soul energy.”

Since their inception, Evolfo has been known for their performances and the band looks to keep developing. “I want the show to go above and beyond. I want to be on bigger stages consistently where we can experiment with the spectacle and the sound to their fullest extent,” said Gibbs. “My favorite thing about my band is that it’s what I do for fun. I live for the tours and I look forward to these shows more than anything else.”