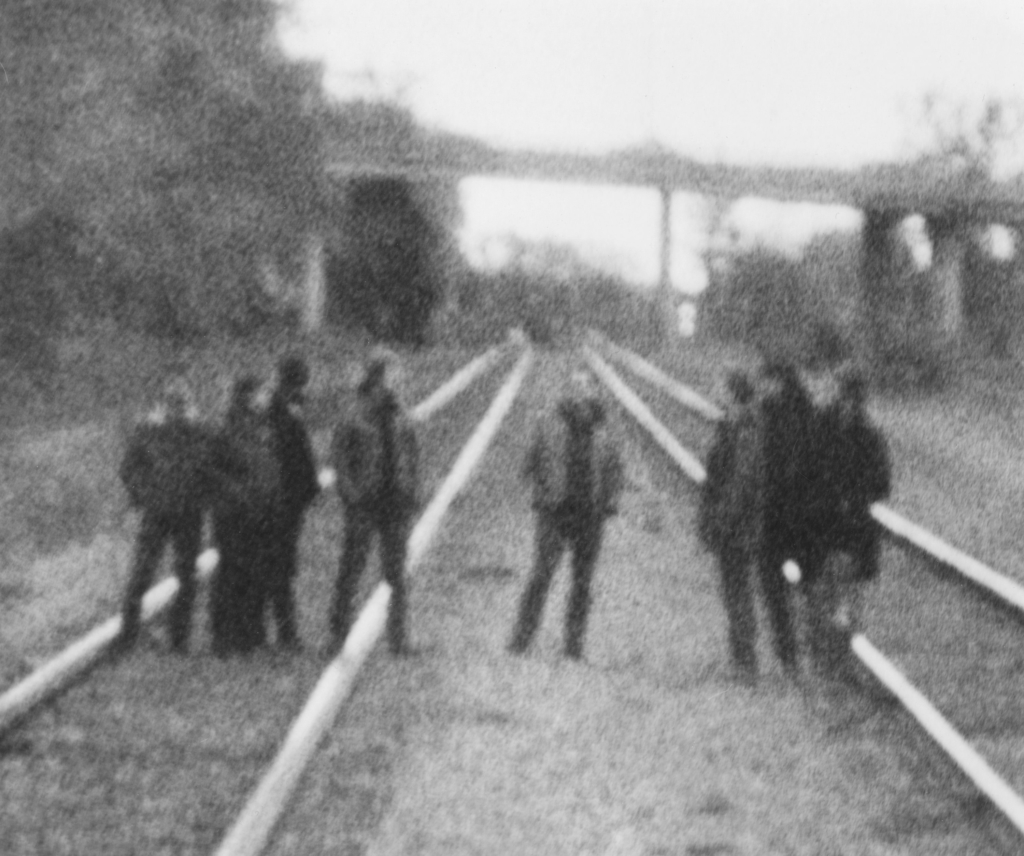 Godspeed You! Black Emperor released a string of albums from 1997-2002 widely recognized as redefining what protest music can be, where longform instrumental chamber rock compositions of immense feeling and power serve as soundtracks to late capitalist alienation and resistance. The band’s first four releases—especially F#A#∞ (1997) and Lift Your Skinny Fists Like Antennas To Heaven (2000)—are variously regarded as classics of the era and genre. Godspeed’s legendary live performances, featuring multiple 16mm projectors beaming a collage of overlapping analog film loops and reels—along with the distinctive iconography, imagery and tactility of the band’s album artwork and physical LP packages— further defines the sui generis aesthetic substance, ethos and mythos of this group. GY!BE has issued two official band photos in its 25-year existence (the second, below, a 2010 recreation of the first from 1997) and has done a half-dozen collectively-answered written interviews over that same span. The band has never had a website or social media accounts. It has never made a video. Few rock bands in our 21st century have been as steadfast in trying to let the work speak for itself and maintaining simple rules about minimising participation in cultures of personality, exposure, access, commodification or co-optation.

Following a seven-year hiatus that began in 2003, Godspeed returned to the stage in December 2010 (curating the UK festival All Tomorrow’s Parties) and the band’s post-reunion period has now lasted over a decade, marked by hundreds of sold-out live shows and three additional albums, all of which have been met with high acclaim.

“What’s political music? All music is political, right? You either make music that pleases the king and his court, or you make music for the serfs outside the walls. It’s what music (and culture) is for, right? To distract or confront, or both at the same time? A thing a lot of people got wrong about us – when we did it the first time, a whole lot of what we were about was joy. We tried to make heavy music, joyously. Times were heavy but the party line was everything was OK. There were a lot of bands that reacted to that by making moaning ‘heavy’ music that rang false. We hated that music, we hated that privileging of individual angst, we wanted to make music like Ornette’s Friends and Neighbours, a joyous, difficult noise that acknowledged the current predicament but dismissed it at the same time. A music about all of us together or not at all. We hated that we got characterised as a bummer thing. But we knew that was other people’s baggage. For us every tune started with the blues but pointed to heaven near the end, because how could you find heaven without acknowledging the current blues, right?” The Guardian, October 2012