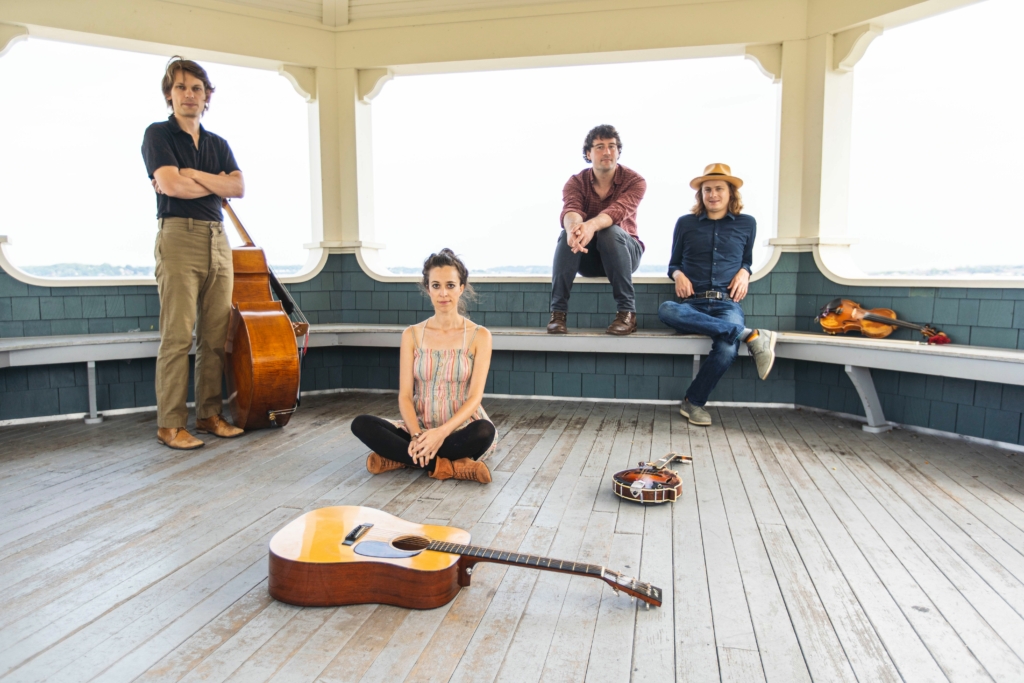 Hawktail is the instrumental acoustic quartet of fiddler Brittany Haas, bassist Paul Kowert, guitarist Jordan Tice, and mandolinist Dominick Leslie. Though at first glance it looks like an acoustic superpicker side-project, their all-original music is cohesive and unique, distinguishing them as an ensemble with a sound built from the ground up. Flush with orchestral sweeps and sparse vigils, with strains of the American South and the North Atlantic, this cosmopolitan sound is not what you’d expect from a string band.

Each member of Hawktail brings a strong individuality to the project. Haas, whose 2004 self-titled release instantly became the touchstone for a generation of old-time fiddlers, has since lent her sound to Crooked Still, Live From Here, Steve Martin, and David Rawlings, where she played alongside Kowert, well known as the Grammy-winning Punch Brothers’ virtuosic bass player. Tice is a rare guitar player whose music showcases his unique identity and a particular knack for song and tune-writing, and Leslie is a versatile mandolinist whose rhythmic sensibility has made him ubiquitous on the acoustic music scene for over a decade. However, despite each of their ability to contribute to many musical situations, something special happens when they unite as Hawktail. Together, they have fostered a reputation as a rare ensemble of composers and instrumentalists able to take the listener on a journey, without the use of words.

For nearly ten years, Hawktail bassist Paul Kowert has kept a computer folder of musical seeds — a digital root cellar of voice memos, studio outtakes, concert tapes. “I’ve been a cataloguer of stuff,” Kowert tells me from his hotel in Telluride (in addition to his work with Hawktail, Kowert is kicking off a summer tour as one-fifth of the Grammy Award-winning quintet Punch Brothers). “Periodically, I would go through the folder looking around, and I kept coming back to this file.”

“This file” is a thirty-second voice memo from 2016. “We called it ‘Complete Sound,'” Jordan Tice, guitarist, recalls. “It’s me just strumming… then Britt found this syncopated rhythm. We were kinda like, oh stop that’s really cool. Then Paul grabbed his iPhone and hit record.” Zooming in from Nashville, Tice sings the riff of “Complete Sound” — it’s the B-section of “Updraft,” one of the standout tracks on Hawktail’s newest release. “You come up with things and you don’t know what to do with them yet,” Tice explains, “you don’t have the context or the experience to bring it around home base yet.”

In the six years since “Complete Sound” — years that saw the release of Hawktail’s acclaimed freshman and sophomore efforts, Unless (2018) and Formations (2020) — Hawktail has developed not only the context and experience necessary to bring the “Complete Sound” musical seed to fruition, but those elements necessary to craft the quartet’s most ambitious album yet.

Running just under thirty-minutes, Place of Growth is music made for a single sitting — a collection of eight tracks laced together by a common thread of recurring “Wanderings” and thematic recollections. “It’s not a single piece,” Kowert is quick to clarify, but one could reasonably mistake it for such; Place of Growth lives somewhere between a collection of tunes and a chamber suite. “If I had to give it a term — and I only chanced upon this last night,” Kowert tells me, “I’d call it a ‘tune cycle.'”

To ask what this tune cycle (or any instrumental record) is about is to miss the point. But speaking with each member of Hawktail, a common theme emerges. At its core, Place of Growth is a testament to — indeed, a celebration of — what fiddler Brittany Haas calls Hawktail’s “connection though time” as well as the growing musical identities of each member. (Like Tice, Haas is Zooming in from Nashville — in our first interview, she’s perched at her desk at home; in our second, she’s hanging out with longtime collaborator and fellow fiddle legend Darol Anger’s dog). “We have this history together,” Haas explains. “We know each other. Hearing that — hearing each other’s personalities — was a main goal [of Place of Growth]. And I think we did achieve that, giving everybody space to be themselves.”

Mandolinist Dominick Leslie, texting me in the midst of a country-wide tour with Molly Tuttle and Golden Highway, writes movingly about the sort of space Haas describes. “It’s like being in a room with three great therapists,” Leslie says, “playing with a group that listens as deeply and wholeheartedly as Hawktail. Hearing them play is like hearing the voices of old friends.”

By giving each “old friend” their own space to speak, Place of Growth makes for a remarkably wide-ranging — though nonetheless unified — musical journey. With “Antilopen,” a raucous arrangement of Swedish fiddler Lena Jonsson’s original, we find Hawktail at their boldest and most energetic — a showcase of the quartet’s dexterity and sense of adventure (a fitting tribute to Jonsson and the tune’s animal title). With “Shallows,” we hear Hawktail at their most intimate and introspective; played without a steady pulse (“a rubato kind of thing,” Haas explains, “more like something classical musicians do”), “Shallows” is dreamlike and lyrical, allowing the melody — passed from fiddle to mandolin to bass — to speak on its own terms.

Place of Growth revels in these extremes — in bridging the gaps between the vigor of “Antilopen” and the tenderness of “Shallows,” between the drive of “Updraft” and the openness of “Big Sun.” It revels, in other words, in the idiosyncrasy and imagination of Hawktail — a combination made possible by care and patience, by giving four musicians the time and space to grow and flourish together.

To make that space and time — to make that space and time count — Hawktail traded their native Nashville for a secluded studio in rural Tennessee, tracking Place of Growth over two weekends (made up of sixteen-hour days) at Shelbyville’s Tennessee Studios. “We basically camped out in the studio, sleeping in the same building we were recording in,” Tice says. “We’d drive out of the city and be entirely alone with the music and with each other.”

If Hawktail is reluctant to proscribe a particular meaning to their music (“it’s not our place,” Kowert says), each member returns to this notion of musical and personal connection — to Haas’ description of giving “everybody space to be themselves,” Tice’s image of being “alone with the music and with each other,” Leslie’s vision of four “old friends.”

This is as much explicit “meaning” as Kowert will provide. And that just might be enough. “There’s never gonna be another one of these people,” Kowert says. “So what does the album mean? It’s the music that we made at this time in our lives with this specific group of people. It couldn’t have been anywhere near the same if anyone was different, I’m proud of that. It couldn’t be anywhere near the same.”

And it may not be “anywhere near the same” again — not in the immediate future, at least. As various projects scatter Hawktail to the wind, the next stage of the quartet’s growth is anyone’s guess. But to think of Hawktail’s future may be to miss the point once more. Place of Growth is a record with its feet planted firmly in the present, perhaps a perpetual present; it is a record that captures musicians at a distinct moment in their lives and holds that moment in place. In this capacity, one cannot help but think of the herbarium sheet on the album’s cover: a flower — a bell heather — plucked and pressed over a hundred years ago; a living thing — a growing thing — held in place, preserved.