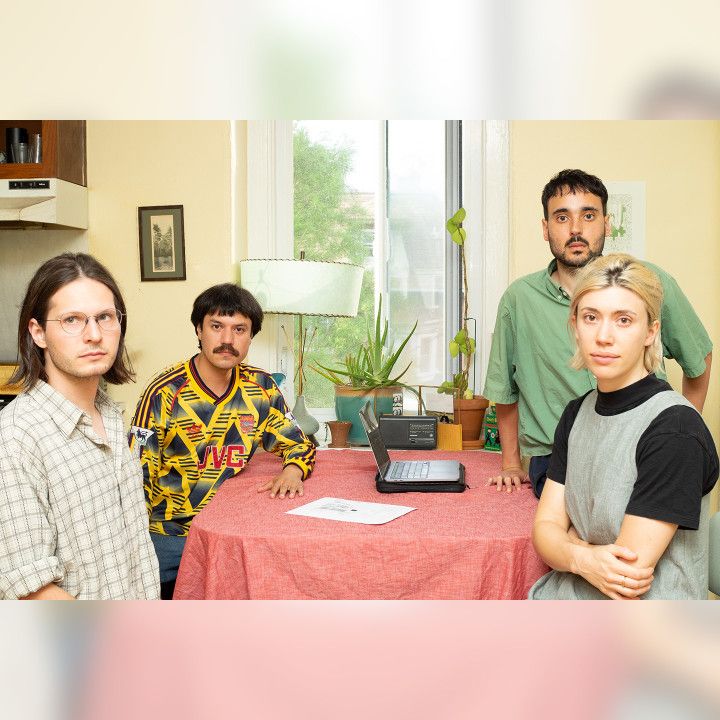 Water From Your Eyes, Dari Bay

Palm — the Philly-based band of Hugo Stanley (drums), Gerasimos Livitsanos (bass), Eve Alpert (guitars/vocals), and Kasra Kurt (guitars/vocals) — announces their new album, Nicks and Grazes, out October 14th on Saddle Creek. Today, they present its lead single/video, “Feathers,” marking their first new music in four years. On Nicks and Grazes, Palm embraces discordance to dazzling effect — capturing the spontaneous, free energy of their inimitable live shows while integrating elements from the traditionally gridded palette of electronic music. Citing Japanese pop music, dub, and footwork as influences on the album’s sonic landscape, the band also found themselves revisiting the artists who inspired them to start the group over a decade ago such as Glenn Branca, Captain Beefheart, and Sonic Youth. Returning to the fundamentals gave Palm a strong foundation upon which they could experiment freely, resulting in their most ambitious and revelatory album to date.

“Feathers” marries Palm’s off-kilter artistic sensibilities with an impossibly catchy vocal melody that unspools around the refrain “Make it up! Like a performer!” As the song progresses, all that’s left is a skeletal arrangement. The stark, black and white medieval video was directed by Daniel Brennan. “‘Feathers’ went through a few drafts — I was initially playing a plodding line on the bass guitar but something about the arrangement wasn’t working. It was only once I switched to bass synth that there was a strong enough center for the atonal guitar and synth pads to make sense,” says Livitsanos. “The first one we tracked in the studio, ‘Feathers’ became an undanceable dance song at the last minute.”

Palm’s live performances are revered for their uncanny synchronicity; one gets the sense that, on psychic levels unseen, the members share an intuition unexplained by logic. Over the last decade, the costs of maintaining such intense symbiosis consumed the lives of its members to a point of exhaustion, and to a place where they were unsure if they’d make another record. It was only after multiple freak injuries followed by a pandemic, forced a pause — from touring but also from writing, rehearsing, even seeing each other — that the four were able to regroup and see a way forward again. “I used to think of Palm as an organism, a single coherent system, and at a younger point in our lives, that seemed like the ideal way to be a band,” Alpert reflects. “I’m realizing now that it’s unrealistic, that for this band to grow we had to tend to ourselves as individuals — little pieces — who create the whole.”

Nicks and Grazes is a natural progression from their 2018 album Rock Island, which found the band beginning to incorporate electronic elements into their sound. While making Nicks and Grazes, the line between songwriting and production was blurred. The band spent the last few years educating themselves on the ins and outs of production by learning Ableton while also experimenting with the more percussive and textural elements of their instruments. Palm also worked with a producer for the first time, Matt Anderegg. “With this record one might assume that we were slowly building a house brick by brick, but it’s more like we were gathering and experimenting with different types of materials for the first couple of years, and then we built the house somewhat quickly,” Stanley says of the making of Nicks and Grazes. “It’s hard to overstate Matt’s role in bringing everything together.”

“Music isn’t about things. It is things,” Richard Powers wrote in his novel Orfeo. While making Nicks and Grazes, Kurt found himself returning to this quote as a guiding philosophy. Though a single narrative remains elusive throughout the album, echoes of the members’ individual and collective experiences come into focus through the use of samples. Snippets of conversation on tour in Spain and the blare of a Philly high school marching band’s early morning practice are just a few examples of daily sonic flotsam the band incorporated with instrumentation to create a new communal experience. The album’s titular track is a prime example; Anderegg combined the band’s disparate field recordings into a diaristic kaleidoscope of sound, as much a collection of memories as it is its own composition. “We’re constantly grabbing at sounds that move us,” Stanley says. “In a sense, the record is cobbled together from these pieces of our lives.”