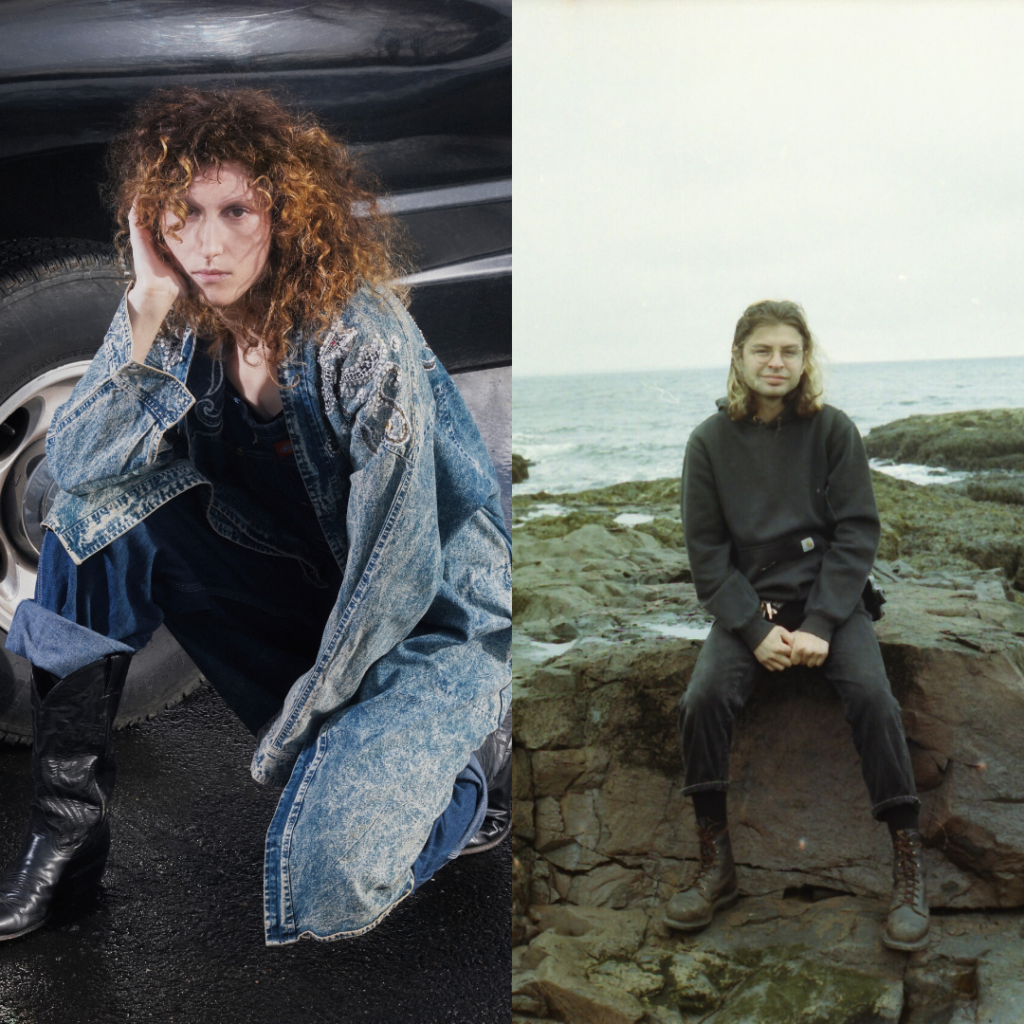 Squirrel Flower’s heart-rending sophomore album Planet (i), following her 2020 debut I Was Born Swimming, is exactly that. A singular planet, a world entirely of artist Ella Williams’ making. The title came first to her as a joke: it’s her made-up name for the new planet people will inevitably settle and destroy after leaving Earth, as well as the universe imagined within her music. “Planet (i) is my body and mind,” Williams says, “and it’s the physical and emotional world of our planet. It’s both.” Buoyed by her steadfast vision and propelled by her burning comet of a voice, the record is a love letter to disaster in every form imaginable. Tornadoes, flooding, gaslighting assholes, cars on fire—these songs fully embrace a planet in ruin. As Williams rides from melancholy to jubilance to complete emotional devastation over the course of twelve songs, she carves out a future for herself and those she loves. Planet (i), out June 25, 2021 on Polyvinyl and Full Time Hobby, is at once a refuge, an act of self-healing, and a musical reflection of Squirrel Flower’s inner and outer worlds.

Williams wrote most of the songs on Planet (i) before the COVID-19 pandemic, but disaster looms large in its DNA. Susceptible to head injuries having played a lot of sports in her youth, Williams received three concussions from 2019-2020; two at cafe jobs in her home state of Massachusetts, and a third, funnily enough, while making out with someone in a sloped attic at a house show. Amidst the chaos of touring internationally during her own healing process, she began weaving threads between her physical and personal sense of ruin and her lifelong fear of the elements: of being swept up by storms, floods, and the deep ocean. “To overcome my fear of disasters,” Williams says, “I had to embody them, to stare them down.” This journey of decay and healing is the lifeblood of Planet (i). “I’m not scared of the storm,” she insists on “Desert Wildflowers.” “I’ll be lying on the roof when the tornado turns.”

Once quarantine set in, Williams, known for her magnetic live concerts, began to produce demos in her room, amassing a collection of more than 30 recordings. “I constantly write,” she says, “but because of the pandemic and the unemployment checks I received, I was able to spend every day recording what became the skeleton of this album.” Feeling a sense of artistic synchronicity over international phone calls with producer Ali Chant (PJ Harvey, Perfume Genius), and with newfound covid antibodies, Williams flew to Bristol, UK in the fall of 2020 to record Planet (i) at Chant’s studio, The Playpen. “We had this shared creative language,” she recalls, “and the recording process was, like my demo process, very sculptural. Instead of recording live with a full band, we built this record layer by layer, experimenting, taking risks.” Williams dedicated her time in Bristol to exploration, both in the studio and outside of it. As she roamed the city in her beloved green garden mucks, the same boots featured on Planet (i)’s album art, Squirrel Flower unlocked a new creative alchemy.

While Williams and Chant played most of the instruments on the record, Bristol drummer Matt Brown and Portishead’s Adrian Utley also joined their sessions. “Adrian brought such stunning textures to the arrangements,” Williams says. “I was starstruck watching him play guitar with a pair of pliers.” And when Chant suggested the idea of backup vocals, Williams, whose voice had until now stood alone in her songs, enthusiastically enlisted friends and family to join her remotely with their voices and instruments. Around Squirrel Flower’s voice and vision dance the contributions of Jess Shoman (Tenci), Tomberlin, Katy J. Pearson, Jemima Coulter, Brooke Bentham, and her brothers Nate and Jameson Williams, as well as her father Jesse.

The songs on Planet (i) are Squirrel Flower’s instruments for connection: with the people in her life, her collaborators, audiences, and ancestors; a lineage of artists whose spirits continue to inform her art. At the heart of this record is an insistence on connection and healing in the face of catastrophe. Williams treats her songs like well-loved cars, vehicles with busted exteriors and flame-kissed engines. These songs hurtle down a freeway wracked by firestorms and flash floods, their drivers in search of human connection, no matter how tenuous, no matter how painful. In this search for communion, Squirrel Flower sings with the clarity of an artist who has discovered not only the precise power of her voice, but all the devastating shapes it can take.

On the explosive lead single “Hurt A Fly,” Williams is a volatile, relentless presence. She takes the persona of a manipulative lover as she lurches from guilt to sorrow to renewed fury, backed by whirring, frenetic guitars. And in “I’ll Go Running,” Williams begins on a haunting simmer, pitching her voice over languid, slow-burning guitars from quiet resistance to full-on emotional rebellion by the song’s end: “I’ll be newer than before I’ll be something that you’ve never seen.” It’s the mantra of an artist in flux, obsessed with motion and change, but determined to move and change on her own terms. On “Flames and Flat Tires,” the third single, Williams rides this motion onward in a bright wave of sound, comparing her body to a burning car on a 4am joyride, the city crumbling behind her.

On Planet (i), Squirrel Flower reveals a bright and uncompromising vision, confident in her powers of self-healing and growth. No matter what the disaster ahead of or within her looks like, and no matter how she shape-shifts to meet it, Squirrel Flower will always be a world of her own, a space-rock flying down the road in flames and flat tires. As Planet (i) wheels to a close from the cartop lovesickness of “Iowa 146,” the floodwaters of “Deluge in the South,” and the tornado fury of “Pass,” to the hushed climax and acceptance of “Starshine,” she leaves us to face down disaster with hope in hand:

There’s a space between literal and abstract where art often resides, and few bands excel at navigating that surreal territory more deftly than Horse Jumper of Love. On their third full-length, Natural Part, the Boston-based three-piece revels in the act of grasping at something that can’t be held, smudging the lines between rich details, hazy memories, vivid moments, and intangible feelings to create their most captivating record to date.

Horse Jumper of Love–guitarist/vocalist Dimitri Giannopoulos, bassist John Margaris, and drummer Jamie Vadala-Doran–have steadily evolved since their formation in 2014, honing a mix of sprawling slowcore and raw indie rock across their 2016 self-titled debut and 2019’s So Divine. Now, Natural Part feels like the band’s biggest step forward yet. The group teamed once again with engineer Bradford Krieger and convened at his Rhode Island studio, Big Nice, to record. “I definitely don’t write the same way I did for the other records anymore,” Giannopoulos explains. “I never want to force anything or try to stick to a formula, and for this record I really felt like I could do whatever I wanted. I feel like I know myself a little more, like I’m a little more tapped into who I am and the songs feel more personal because of it.”

Sonically, Natural Part feels even more expansive than anything Horse Jumper of Love have done before, which is no small feat for a band whose music has often hinged on billowing guitars and roomy drums. Mixed by Danny Reisch (Sun June, Shearwater, White Denim), the album features a noticeable leap in fidelity, allowing the detailed songwriting to shine through without losing the tactile edges that imbue Horse Jumper of Love’s music with so much personality. Opener “Snakeskin” gently welcomes the listener with an enveloping atmosphere, before a sharply angled guitar riff in the towering second track “Ding Dong Ditch” fractures the aura. Familiar influences like Duster and David Berman can still be heard throughout, but new elements like cello—performed by Emily Dix Thomas and inspired by both Nirvana’s unplugged album and listening to Oasis’ “Wonderwall” in preparation for a Halloween cover set)—add different textures to the band’s reverberating sound. On “Chariots,” the new instrumentation blends effortlessly with Vadala-Doran and Margaris’ taut but roaming rhythm section, and adds an otherworldly mood to Giannopoulos’ lyrics.

A sense of mystery and the inevitability of change permeates much of Natural Part, with Giannapoulos often capturing snapshots that take note of a flickering feeling in the mundane, and then letting his imagination expand it into something profound. The title track encapsulates this approach as well as some of the recurring sentiments of the record: “I was thinking about the natural distancing that can happen between people,” Giannapoulos says. “They can just go their separate ways or grow apart, or it can even be people passing away. But that thought also started with me literally combing my hair,” he adds with a laugh. “The line between figurative and not gets pretty blurry. Sometimes weird shit happens but there’s some meaning there. Something will just stand out, you get immersed in it, and a song sort of flows out. It all feels like a collage of a certain time in my life.”

On songs like the poppy “I Poured Sugar In Your Shoes,” the hypnotic “Under The House (Skunks),” or the off-kilter “Sitting On The Porch At Night,” Giannopoulos’ molds the very specific experiences noted in the titles into meditations on life’s intricacies. Late in the album, the sub-two-minute standouts “I Put A Crown On You” and “Mask” highlight Horse Jumper of Love’s ability to economically communicate larger ideas; the former is a shining acoustic missive on appreciation blurring dependency, while the latter is a slowly unfurling plume of guitars that contemplates the physical and invisible barriers between us. “I was thinking about someone driving their car, wearing a mask–literal or not literal–and having that layer in front of their face,” Giannopoulos explains. “Then the windshield is another layer, and it’s a foggy night, so that’s another layer. You’re passing by them and there’s just all of these real and not real things between you and another person.”

It’s those kinds of details that makes Natural Part such a compelling listen. It’s an album planted firmly in small moments that feel big: the unexpected flashes that somehow feel authentic and esoteric all at once, and cut through our busy lives to ground us in something that seems meaningful—even if we can’t fully articulate why. “I love when those moments happen and it inspires something,” Giannopoulos reflects. “It makes me feel connected to the world. When something sparks my interest like that, it just feels like this is what it’s all about.”