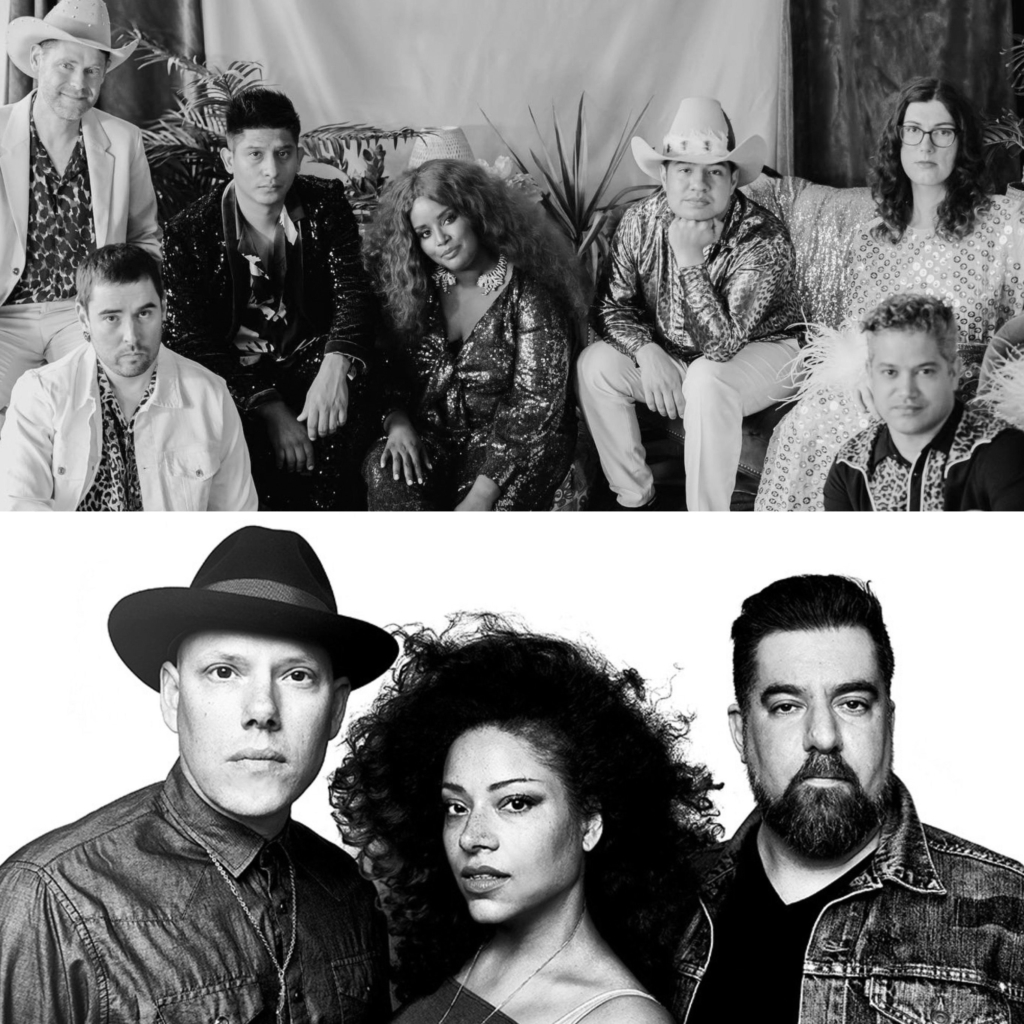 There is a contagious and combustible energy every time the eight-piece band The Suffers steps on the scene. NPR’s Bob Boilen attributes the band’s allure to their “Soul, straight from horn to heart.” He adds, “This band is on fire when it’s in front of an audience…but the intensity of their shows are also captured in the studio.” Following The Suffers’ electrifying late night TV debut on Letterman in 2015, David Letterman exclaimed, “If you can’t do this, get out of the business!” There is something undeniable about The Suffers (whose name is a reference to the 1978 Jamaican film Rockers starring Leroy “Horsemouth” Wallace, Jacob Miller and Burning Spear, among others), that instantly hits home with their audiences. “We make music for all people,” says lead vocalist Kam Franklin. “At this point, we’ve played all over the world and one thing is certain – if the music is good, the people will enjoy it.” Since 2011, the H-Town heroes have been on a steady grind and have no plans of stopping.

The Suffers exploded onto the scene in 2015 with their dazzling EP Make Some Room, which was followed by their critically heralded self-titled debut in 2016. The Suffers’ released their latest record Everything Here on Shanachie Records July 13, 2018. Everything Here is the band’s most bold statement yet.  Lead Singer Kam Franklin states, “Our hope is that our fans walk away feeling empowered, resilient, and inspired to live a better life.”

Guitarist Kevin Bernier says, “Everything Here, as a whole, explores the many aspects of who we are as people through songs. We’ve had crushes on people, we’ve had our hearts broken, and we’ve moved through all the difficult times so that we can experience the joyful moments.” The Suffers have got everything you need and there’s no need to look further – a heaping dose of soul, a dash of reggae, a splash of jazz, a pinch of salsa, a hint of rock ‘n’ roll and a dollop of hip hop and funk – and that is just a few ingredients simmering inside their magical Gulf Coast soul.

“Houston has played a huge part in making me who I am and introducing our music to the masses, and for that, we are forever grateful.” The Suffers have played sold out shows in Japan and Latin America, turned out audiences at the Newport Folk Festival and Afropunk Festival and made believers of just about anyone who has experienced their live shows. “We’re a testament to teamwork and camaraderie resulting in things working out even when the odds are against a positive outcome,” says drummer Nick Zamora. “The wonderful thing about music is that it is ultimate universal communication,” reflects trumpeter Jon Durbin.

The band is working on their highly anticipated follow up to Everything Here, and will release new music in the Fall of 2021.

Dwight & Nicole is an American indie-soul band fronted by Dwight Ritcher & Nicole Nelson. Ritcher and Nelson met in Boston when they were both just out of school and cutting their teeth on the local club scene. They discovered a shared love of classic blues greats like Albert King and Lighting Hopkins, covering songs by their vocal heroes Mavis Staples, Jimmy Witherspoon and Etta James. All the while obsessing over writing, and honing their own original music.

Both Ritcher and Nelson posess strong natural voices that stop you dead in your tracks. Wether belting or whispering, their singing commands attention. They are both also captivating performers, multi-instrumentalists, and strong songwriters. This rare mix finds them standing out from the crowd of up and coming East Coast bands. Ritcher plays a Gibson Flying V guitar – picking up his first one as a teenager in Long Branch NJ – he has never played anything else. Nelson, a gifted singer & classical violinist from NYC has described the bass as her first real love. She picked it up again in 2015 and has not looked back. The recent addition of powerhouse drummer Ezra Oklan to the band has solidified their sound. They took this combination into the studio in 2017 with spectacular results.

Dwight & Nicole’s 2018 EP “Electric Lights” was recorded live to analog tape with multi-Grammy Award Nominated producer Joel Hamilton (Aaron Neville, The Meters, The Black Keys, Yoko Ono) at Studio G in Brooklyn, NY. Hamilton, undoubtedly captures their sound and live energy. They have just self released two singles – the shimmering soul-anthem “Wait” and the dusty rocker “Hi-Lo” ahead of the EP, which have begun to introduce their music to a whole new wave of listeners. The release has also just landed D&N their first major label distribution deal through Orchard / Sony Music, and an Independent Music Award nomination.