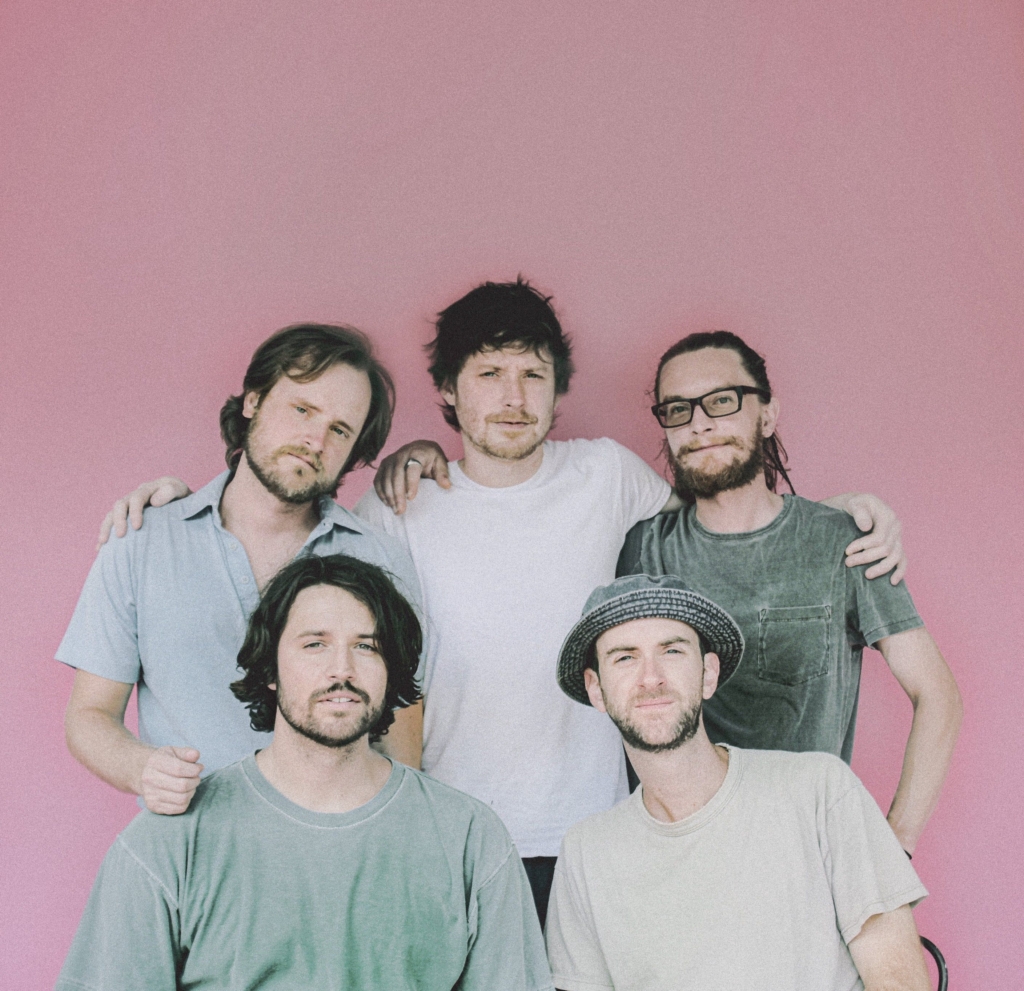 The full-length debut from Bendigo Fletcher, Fits of Laughter is a collection of moments both enchanted and mundane, sorrowful and ecstatic: basking in the beauty of a glorious lightning storm, waking with a strand of your beloved’s hair happily caught in your mouth, drinking malt liquor while bingeing “The X-Files” on a lonesome Saturday night. As lead songwriter for the Louisville, KY-based band, frontman Ryan Anderson crafts the patchwork poetry of his lyrics by serenely observing the world around him, often while working his grocery-store day job or walking aimlessly in nature (a practice partly borrowed from the late poet Mary Oliver). When matched with Bendigo Fletcher’s gorgeously jangly collision of country and folk-rock and dreamy psychedelia, the result is a batch of story-songs graced with so much raw humanity, wildly offbeat humor, and a transcendent sense of wonder.

True to its spirit of purposeful wandering, Fits of Laughter unfolds in a wayward yet lushly detailed sound, embroidered with everything from crystalline harmonies to blistering guitar riffs to heady drum-machine beats. For help in forging the album’s ragged elegance, Bendigo Fletcher worked with producer Ken Coomer (the original drummer for Wilco and Uncle Tupelo), whom Anderson met in a flash of strange serendipity. Soon after he’d connected with Coomer via phone and bonded over a shared affection for Pink Floyd’s Obscured by Clouds, the band headed to Nashville to record in Coomer’s Cartoon Moon Studio, laying down the album’s eight songs in nine frenetic days.

In keeping with the regional perspective that defines much of folk and country music, Fits of Laughter ponders certain paradoxes inherent in the band’s homeland. “In Kentucky there’s a long-running frustration of tradition and stubbornness versus progress,” says Anderson. “On one side you’re looking at things like the coal industry or Mitch McConnell, but then there’s also a feeling of togetherness and a fuck-the-man attitude and a loving desire for everyone to be left alone.” Referring to Fits of Laughter as a coming-of-age album, Anderson also examines a more internal conflict throughout the songs, including his choice to abandon his medical-school aspirations in favor of pursuing a career in music. “The title’s really about the spectrum of emotions I’ve felt on the way to finding what makes me feel like I’m living truthfully, rather than holding onto what I think other people’s expectations are of me,” he says. “It’s a phrase that bridges all of those emotions—everything from joy to hysteria.”

On “Sugar in the Creek”—the groove-heavy opening track to Fits of Laughter—Bendigo Fletcher simultaneously explore those inner and outward tensions, presenting a sweetly rambling dream of escape from the chaos of the modern world. “That song partly has to do with my fantasy of living off the land and how magical that would be,” says Anderson. “I’m from the suburbs, and over the years I’ve made friends who have family farms and I’m really drawn to that way of life, even though I know it’s not all flowers.” One of the album’s most fantastically unhinged moments, “Evergreen” cycles through a series of spellbinding tonal schisms, cresting at a chorus lyric that speaks to the urgency of self-preservation (“I do believe I’m coming around again/When I don’t think of anybody other than myself”). “I wrote ‘Evergreen’ in the early stages of admitting to myself that medical school was a path that looked way more obscured than working to make records,” says Anderson. “I was also getting into self-care methods for the first time in my life, and realizing that you have to take time for yourself in order to be the best and truest version of yourself for everyone else—so in a way, that’s a form of service.” And on “Astro Pup,” Bendigo Fletcher deliver an epic heartbreak anthem spiked with heavenly harmonies and radiant banjo melodies, its lyrics illuminating the ingenuity of Anderson’s self-effacing wit (“I am dog hair all over your bed/I live in the house of the misbehaved”).

As Bendigo Fletcher’s first time working with an outside producer, Fits of Laughter draws much of its freewheeling energy from the deliberately unfussy nature of their recording sessions. “Going into working with Ken, we felt confident that we wanted to retain the jangly sweetness of the music we’ve made in the past,” says Anderson, who created Bendigo Fletcher’s 2015 debut EP Consensual Wisdom on his own and later filled out the band’s lineup in a process he describes as “a gradual adding of members who are all natural friends.” “There’s loose ends and missed beats that we didn’t intend to make happen, but those moments always feel really special when they’re resolved—it sounds like a band actually playing together,” he adds. At the same time, Fits of Laughter bears an undeniable immediacy, thanks in part to the band’s decision to limit the tracklist to eight essential songs (a move largely inspired by extraordinarily lean and iconic albums like Television’s Marquee Moon).

In expounding on the observational quality of his songwriting, Anderson points to some invaluable insight gleaned from Dr. Tim Lake, a renowned musician and composer with whom he studied banjo back in college. “Tim’s a great symbol of Kentucky to me—someone who tells it like is, but is also a very true-hearted and generous person,” says Anderson. “He really drove home the idea that in order to be a thoughtful musician and songwriter, especially if you want to play folk music, you have to be a student of history and the world around you.” Naming John Prine among his formative influences, Anderson has since fully devoted himself to that approach. “Songs seem to spark from those moments of responding to the mundane and sometimes bewildering aspect of the human experience,” he says. “In the past few years I’ve taken to manual-labor jobs so that I can do that while I’m stacking apples or whatever else. If a lyric ever comes into my head and makes me laugh or makes me tear up, I know I need to build it into something that’s going to be fun to sing over and over again.”

Through the lifespan of Bendigo Fletcher, Anderson has found that those spontaneously composed lyrics tend to resonate most powerfully with the audience. And in sharing Fits of Laughter with the world, the band hopes to guide listeners toward a deeper trust in their own intuition and instinct. “There’s always going to be other people’s opinions and judgments and ideas on how to live, and more often than not, those ideas come from a place of love” says Anderson. “But ultimately every person knows what truth feels like, as opposed to artifice or putting up walls to get through something you feel you’re expected to do. I suppose these songs are sort of my offering to others, to encourage them to look for that feeling in their own lives, and then follow through on it.”