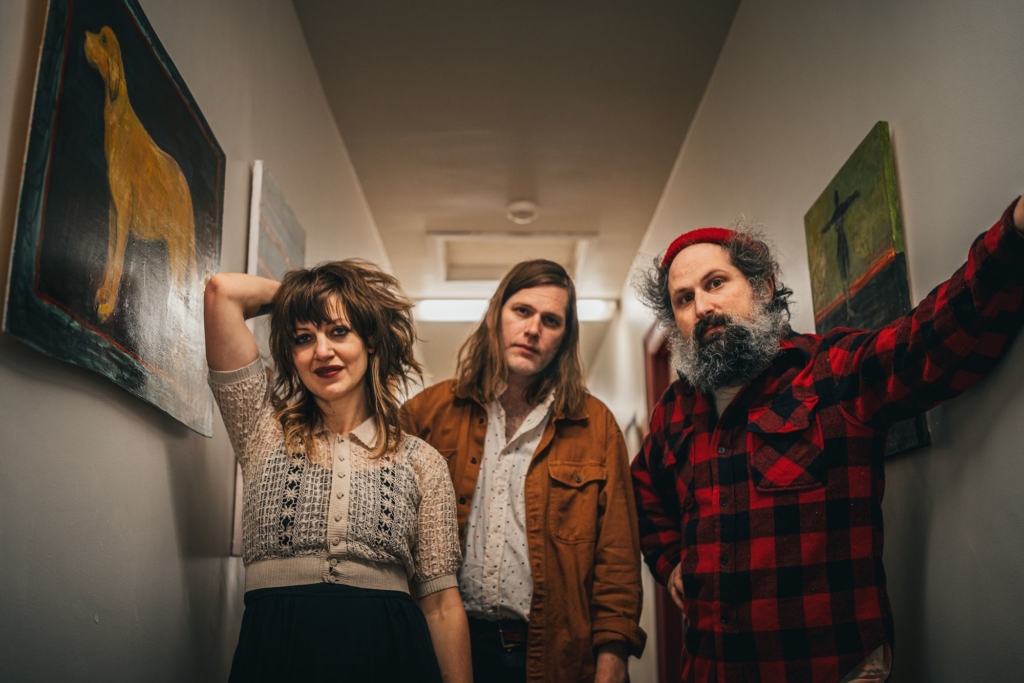 By the time Anaïs Mitchell, Josh Kaufman, and Eric D. Johnson first convened as Bonny Light Horseman in 2018, each member already had the kind of career about which they once only dreamed. Mitchell, for instance, had made a string of fetching albums at the vanguard of modern folk songcraft, even before her musical Hadestown became a Broadway runaway. As a producer and multi-instrumentalist, Kaufman had worked with a dazzling array of heroes and peers, from Bob Weir and The National to The War on Drugs and Josh Ritter. And for nearly a quarter-century, Johnson had penned intricate indie pop as Fruit Bats. But Mitchell had never been in any band that wasn’t playing only her songs. Johnson had long been focused only on his band (assorted collaborations like The Shins notwithstanding), its sole constant member. And Kaufman largely worked to enhance the visions and hopes of others’ bands. Bonny Light Horseman the band, then, offered that very rare adult opportunity—to learn something new with new friends, with a safety net waiting beneath as needed.

No net, of course, would prove necessary: Bonny Light Horseman’s self-titled 2020 debut was a modern folk masterclass, with the trio reimagining centuries-old transatlantic standards with effortless grace and endless wonder. Perfect timing for the trio or perfect chemistry among its members? Who’s to say, really? Yes? Either way, those GRAMMY-nominated, list-topping recordings not only suggested renewed possibilities for aging songbooks but also marked the arrival of a trio fully capable of reorienting the wider folk landscape.

Still, if Bonny Light Horseman felt at all like the work of some short-lived supergroup or a one-off diversion (it never was), Rolling Golden Holy rebuffsthe notion with preternatural beauty, charm, and imagination. These 11 songs—all originals, written and realized by the trio as a whole—follow the paths of the traditional tunes the band cherishes to new musical and lyrical frontiers, and give the sounds and situations of history the gravity and shape of now. Rolling Golden Holyconfirms that Bonny Light Horseman is not a project but a band, and one presently working at the forefront of modern American folk.

Soon after the release of Bonny Light Horseman in January 2020, Mitchell, Kaufman, and Johnson began discussing their next steps, loosely planning co-writing and recording stints in the months to come. Those sessions were delayed for all the unpredictable but now-familiar reasons until the spring of 2021, when the trio reconvened with their families, kids, and dogs in tow in upstate New York. Their chemistry remained unfazed, intact. Johnson’s wife, Annie, had listened to him work with dozens of collaborators over the decades, but, listening in from one room over, she noted he’d neverseemed so at ease and productive as he was with Kaufman and Mitchell in Woodstock. They were perfecting “California,” a timely and incorruptible classic about moving on in search of something else, if not always something more.

These writing sessions—and two subsequent recording sessions, first at Aaron Dessner’s Long Pond studio and then at what they label their “spiritual home,” the gorgeous and bosky old church called Dreamland—were a series of “yes, and” encounters, each member encouraging the others to take an idea and run with it a little further, to push past comfort zones. They bought a dulcimer, their first full-band purchase, and learned to play it as a trio; every member has at least one dulcimer part on Rolling Golden Holy, a testament to the new safety net they’ve built together, for one another. The album is a trust fall into glory.

The trio asks—and, with every tune here, answers—an essential question on Rolling Golden Holy: Where does traditional folk music end and modern folk music begin, if there even is such a binary? These songs continually suggest and embody an unspoken continuum. During “Gone by Fall,” for instance, Johnson vows to be a “river in a roving eye,” a faithful callback to the standard about unfaithful lovers that Bonny Light Horseman transformed on its debut. Mitchell finds self-sustaining adoration in steamy backseats, nighttime visions, and seasonal storms during “Summer Dream,” crisscrossing generational symbols to tie past, present, and future into a Gordian knot of devotion.

Or again there’s Johnson, who reaches back to 19th-century wartime on “Someone to Weep for Me” to empathize with someone else descended from “a long line of nobodies.” He is just trying to live long enough to feel like he’s mattered to anyone at all, a notion that knows neither age nor borders. Johnson and Mitchell trade lines and share the refrain of opener “Exile,” their luminous response to another of humanity’s eternal conundrums: how to revel in relationships that we know will one day leave us lonely. Love and loss, death and fear, hope and trust: the songs may be different, but the emotional sources remain steadfast.

The circumstances of Bonny Light Horseman’s debut prompted a litany of guests; the circumstances of Rolling Golden Holy, however, prompted a deepening of the trio’s collaboration with drummer JT Bates and bassist/saxophonist Mike Lewis, the only other players here. These constraints motivate the quintet. With its frolicking banjo and playful horn, “Sweetbread” is an ecstatic existential manifesto, Mitchell grinning as she exclaims “Blue sky, Lord, when I die” above Bates’ ascendant drums. The stately “Comrade Sweetheart” is the flip side of the same coin, with the lock-and-key harmonies of Johnson and Mitchell arcing over the exquisitely prismatic arrangement of Bates’ muted cymbal splashes, Lewis’ restrained bass, Kaufman’s sculpted symphony of organ and guitar. This is Bonny Light Horseman stepping into the full splendor of its life as a full band.

Being in a band is obviously not a novel enterprise, but Bonny Light Horseman has always thrived in rendering fresh wisdom and insight from old models, whether that’s scraps of ancient songs or the spark of ever-entwined voices. This is a network of mutualism, created for sharing, learning, risking, singing, and playing as one, not as mere sums of fractions. Rolling Golden Holy, then,is Bonny Light Horseman’s testament to interdependence, partnership, and trust at a moment when we crave such connections so much. Anaïs Mitchell, Josh Kaufman, and Eric D. Johnson fully appreciate what they have found in one another through Bonny Light Horseman; on Rolling Golden Holy, we get to live inside that magic, too.