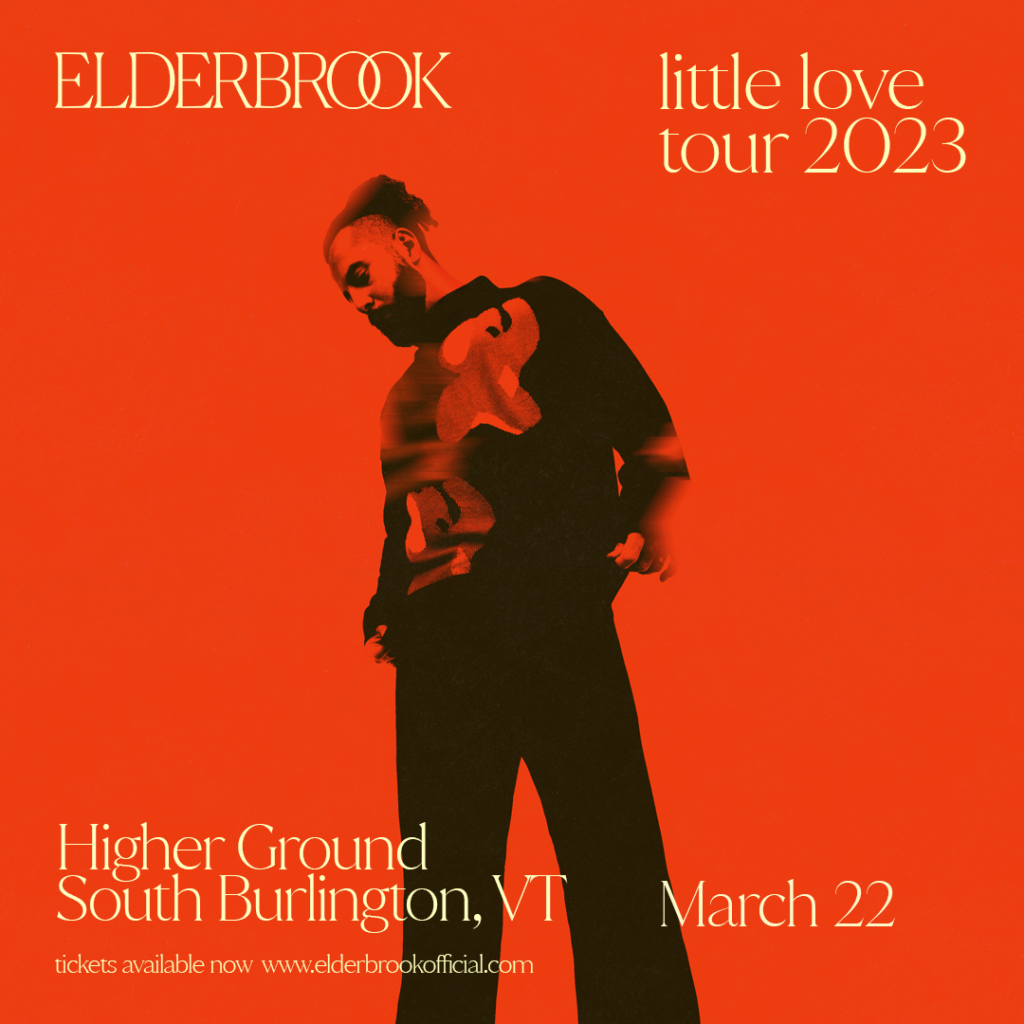 Elderbrook (AKA Alex Kotz) is the type of multi-faceted, forward-thinking talent who is comfortable exploring a range of genres. Now a renowned act on the international circuit, with two LPs, and a stunning live show, as well as numerous solo cuts and collaborations, he exploded onto the scene with 2017 global smash ‘Cola’. The hit track, a collaboration with Camelphat, sold over 7 million copies worldwide, earning him Grammy and Ivor Novello nods, plus a coveted No.1 on the US Dance Airplay Chart.

Since then he’s gone on to pick up over 1.5 billion global streams,, tours with Jungle, Rüfüs Du Sol and odesza, and collaborations with Camelphat, Diplo, Bob Moses and Rudimental which have earned him a revered reputation as one of the most dynamic and prolific electronic artists on the international circuit.

With one critically-acclaimed album (2020’s Why Do We Shake in the Cold?) already taking pride of place in his discography, Elderbrook has channelled his abudant creative output into a second LP. Little Love is a 10-track collection of music composed since his daughter was born in 2020. Now a father of two, Elderbrook draws inspiration from his shift into parenthood, and how his perspective has changed, to create an uplifting, dance-focused long-player.

Still driven by Elderbrook’s penchant for organic sounds and his spellbinding voice, Little Love takes a more electronic direction, influenced by an upsurge in his DJ performances. It’s quintessential Elderbrook – emotive, heartfelt and utterly compelling – albeit with arrangements more suited to the dancefloor. Tracks like ‘What Goes Around Comes Around’ and ‘Tied To You’ epitomise the album’s theme beautifully, utilising Elderbrook’s heartrending vocals, with spinetingling production. Across all 10 cuts he balances the nuance of emotion and the human experience with 4×4 rhythms, stirring basslines and uplifting melodies.

“The album looks at how I’ve been reapproaching my own life and how I’m making choices through the lens of a bigger picture,” he explains, adding that he’s been partying less since he joined the Dad Club.

Life can, and usually does, take on a whole new meaning when you become a parent, a transition that is captured perfectly on Little Love. Growth, progression, and how they influence the direction of your life, are the catalyst behind huge shifts, and subtle changes.

“It’s how you spend each day, the choices you make and choosing to look around and see what you have, rather than constantly striving for something when the goalposts keep moving further apart,” he says.

First single ‘Howl’ sets the tone for the album’s rich emotive content, with an extended intro that builds into a cascade of positive energy, Elderbrook’s highly-charged vocals providing an electrifying accompaniment to the euphoric instrumental. ‘Beautiful Morning’ continues the positivity, albeit with a more laid back tempo, while ‘Talk It Over’ takes us straight back to the dancefloor, with its catchy hook and pumping beats. ‘Just Like Us’ delivers one of the LP’s peak moments, with a scintillating riff designed to transport the listener out of their body and into the ether. Elderbrook edges us into slightly darker territory with ‘We Hurt’ with its gnarly bass, juxtaposed with the bright tones of his vocal delivery. ‘

‘Falling’ is a hypnotic cut that ebbs and flows in waves, with heartfelt lyrics and a jaunty low end. ‘If You Want Somebody’ is one of those beautifully composed earworms that is bound to become a certified anthem. Finally ‘Wasted On You’ closes the album with its wistful vocals and mesmerising arrangement. Layers of synth glide over a 4×4 beat as Elderbrook evokes a stirring atmosphere centred around the sombre line ‘I’m wasted on you’.

Little Love is his first big release since 2021’s Innerlight EP, which featured three collaborations – Bob Moses, Emmit Fenn and Louis The Child – and a solo cut. Owing to the limitations everyone experienced during the global shutdown, Elderbrook utilised the power of digital connectivity to create with artists across the Atlantic. All three collabs are with North American artists, reinforcing his connection to the continent and demonstrating his knack for embarking on successful collaborative projects.

On the title track, a poignant, emotionally-charged dose of electronica, he links up with fellow global superstars Bob Moses, ‘I’ll Find My Way To You’ is a rousing track that pairs lush melodies with the evocative vocals of LA-based artist Emmit Fenn, life-affirming melodic techno creation ‘Broken Mirror’ was produced by dance music master Kölsch, while the stunning ‘Dominoes’ features US electronic duo Louis The Child and finds Elderbrook at his most vulnerable.

“The EP is all about how important it is to trust your instincts and believe that you do have the right ideas,” he explains. “That it’s important to follow your own inner light. It represents the journey of self-discovery that I have been on since becoming a father and learning how to navigate that and trust in myself.”

In 2020 Elderbrook became an album artist. Titled Why Do We Shake in the Cold?, the eleven-track release signalled a new chapter in the story of this wild spirit. “I love all different kinds of music – pop music, underground electronic techno, I love it all,” he expands. “I wouldn’t want to limit myself in any way.”

The LP was a hit: a critically-acclaimed sonic journey that featured some of Elderbrook’s finest tracks to date, including a vibrant Rudimental collaboration ‘Something About You’. Ultimately, it was an exploration into human interaction.

A year on, Elderbrook would make a contribution to another era-defining album, teaming up with fellow musical visionaries Black Coffee and Diplo on ‘Never Forget’. A single and album track on Black Coffee’s Grammy-nominated LP inspirational Subconsciously, the emotion-tinged electro-acoustic jam is propelled by Eldebrook’s soaring, pitch-perfect vocals.

New LP Little Love has inspired an overhaul of Elderbrook’s live show. Already a stunning hybrid of live audio performance and captivating visual production, the show has had a makeover, with his new music providing inspiration for changes to the lighting configurations. “I’ve made it so the tiny little intricacies are picked up, and accentuated by the production,” he explains. “It just brings to light aspects of the music that people may not have noticed before.”

Elderbrook works closely with the visuals team to ensure they complement his music perfectly, and the updated show will be toured across the USA and Europe in the first half of 2023. The tour includes two dates in Australia in January before hitting North America in February, where he will perform 25 shows, from Vancouver to Denver, Chicago and Detroit, New York, Orlando, New Orleans and many more. Ending in Dallas, Texas on the 8th April and returning to Britain for eight dates, including London, Bristol, Manchester, Dublin, Birmingham and Nottingham. Finally, he’ll take the show to Europe with gigs in Berlin, Paris, Amsterdam and Prague among several others. Wrapping things up in Vienna on 2nd June.

Elderbrook’s activity in America has been almost unprecedented (for a British electronic artist) in recent years. He was one of the few UK acts who was able to tour extensively throughout the US in 2020, and his fanbase has grown exponentially from that period up to now. Now a dedicated family man, he takes his partner and their children on tour with him, galvanising their bond and ensuring that his responsibilities as a father are paramount, even when on the road.

As someone who thrives on being busy, travelling and having something to do, Elderbrook’s calendar for the coming year provides all the ingredients to keep him fulfilled. A prolific collaborator, it’s connecting with other artists, and the magic they create together, that drives his bountiful creativity. Through bonding with other musicians, Elderbrook connects with listeners all over the world, telling his story through his remarkable ability to channel emotion into exceptional compositions that energise the dance floor.

Now focused on the bigger picture, the core of his ethos remains the same; connectivity. From bringing his family on tour to interacting with fans, to recording with a myriad collaborators, human connection lies at the heart of Elderbrook’s creative output.

Still pushing forward, buoyed by his children and an unwavering creative drive, Elderbrook continues to soar sky high on his unstoppable ascension…