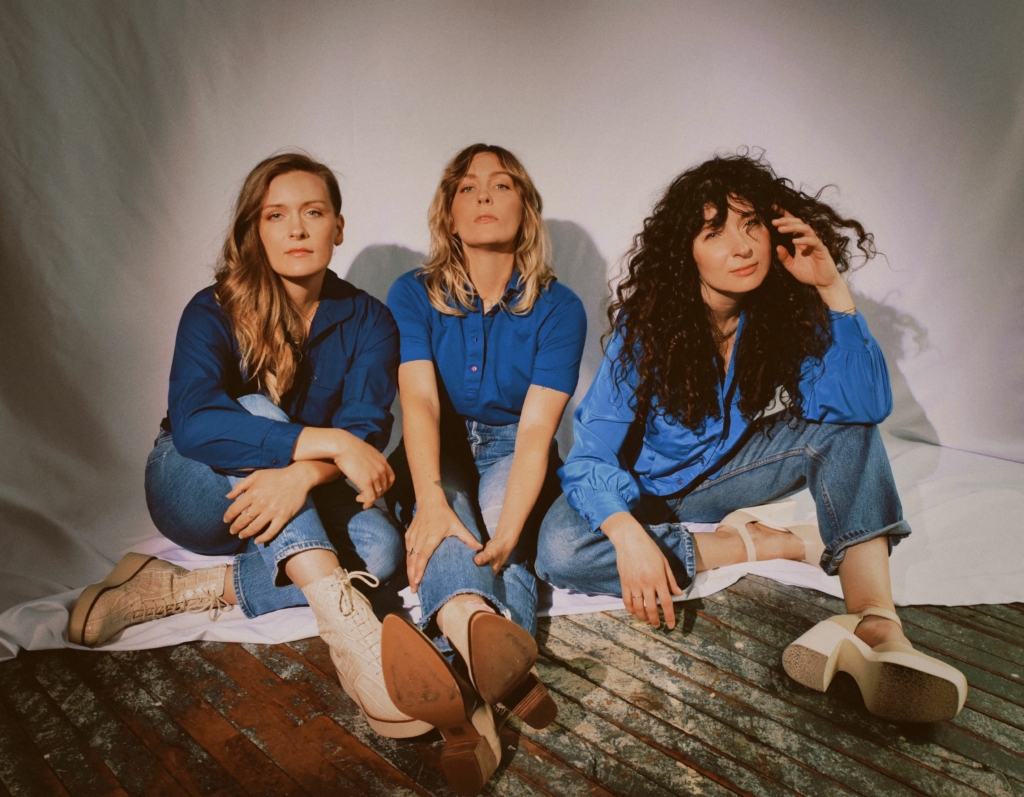 For nearly a decade, Oregon-bred indie-pop trio Joseph have performed a certain emotional alchemy with  their music, channeling their deepest inner tensions into songs that spark a life-changing shift inperspective. In the making of their third studio album The Sun, Natalie Closner and her sisters, twins Meegan Closner and Allison Closner focused their soul-searching songwriting on the quietly damaging
forces that keep us from living fully in our truth (e.g., gaslighting, cultural conditioning, unconscious yetpainfully limiting self-beliefs). Rooted in a newly emboldened sound that lets their breathtaking three-partharmonies shine more brightly than ever, the result is a body of work that radically expands our sense of
possibility, ultimately illuminating a path toward greater peace and self-reliance even in the most chaoticof times.

One of the first songs recorded for The Sun, the album’s shimmering title track served as something of asonic breakthrough for Joseph. “We’d already played that song live so many times and sung it in aparticular way that was more dramatic and had a kind of gravitas to it, but Leggy took it in a morebuoyant and summery direction,” Natalie explains. Inspired by Meegan’s experience in working through
the lessons of a past relationship, “The Sun” now centers on a lush arrangement of galvanizing rhythms,radiant piano tones, and gorgeously euphoric harmonies—all of which lend a profoundly triumphant spirit to the song’s statement of self-celebration (“I thought I was the light switch you turned on/But I was theSun”). As Natalie acknowledges, that shift toward a more joyful and resplendent presentation perfectlymirrors The Sun’s underlying narrative. “The whole album is a sort of thinking through of the story thatyou tell about yourself, to yourself,” she says. “It’s about looking at whatever is diminishing you or making you believe in these limitations you’ve put on yourself, and then finally asking, ‘What if I’m morethan that?’”

“All of our therapists were a huge influence on this album,” Meegan noted. The Sun endlessly revealsJoseph’s commitment to the clear-eyed self-reflection that’s guided the band since their earliest days.Raised in a musical household (their father was a jazz singer and drummer, their mother was a theaterteacher), the three sisters officially formed Joseph in 2014 and got their start playing house shows, quickly landing a deal with ATO Records. After making their widely lauded debut with 2015’s I’m Alone,
No You’re Not, which featured their hit song, “White Flag,” the band went on to attract the attention ofartists such as Billie Eilish, and tour with the likes of James Bay, Amos Lee and most recently The Shins,in addition to taking the stage at major festivals like Coachella, Bonnaroo, Austin City Limits,Glastonbury, and more. While Good Luck, Kid marked a bold departure from the dreamlike folk of their
first full-length, Joseph felt called to push their musical boundaries even further on The Sun—an endeavorthat repeatedly required them to assume a new level of courage and agency in the creative process. “Wegrew a lot in learning how to say ‘no’ and speak up for ourselves,” Allison points out. “The idea of saying‘no’ in order to allow for a better ‘yes’ later on—that was a lesson that we had to learn,” Natalie adds. “Itcould be uncomfortable at times, but making sure that we stayed our course was really powerful for us.”

Over the course of The Sun’s 10 soul-stirring tracks, each member of Joseph adds new texture and detailto the album’s emotional arc by sharing her own distinct viewpoint on the journey toward self-realization.On the sweetly emphatic lead single “Nervous System,” for instance, Allison opens up about learning to
undo the thought patterns that contributed to her longtime struggle with anxiety. “I know it’s noteverybody’s experience, but I’ve found a lot of power in understanding my own ability to self-soothe,instead of turning to other people or some kind of distraction to try to feel okay,” she says. Meanwhile, onthe wistful yet wildly effervescent “Fireworks,” the band speaks to the self-doubt and frustration thatsometimes accompany refusing to compromise your romantic ideals.

For Joseph, the act of fiercely protecting their artistic vision closely aligns with the abundance of insightsthreaded throughout The Sun. “As Closners and as women—or maybe even just as humans—it can bevery hard to tell someone that something isn’t working for you,” says Allison. “But this album was aunique experience, because we learned to step up and stand our ground and speak our truth when weneeded to.” And with the release of The Sun, Joseph hope that listeners might undergo a similartransformation in their sense of strength and self-assurance. “I want people to feel empowered,” saysMeegan. ”I want them to recognize the power with themselves, and to know that they’re good—thatthey’re more than they think they are.”