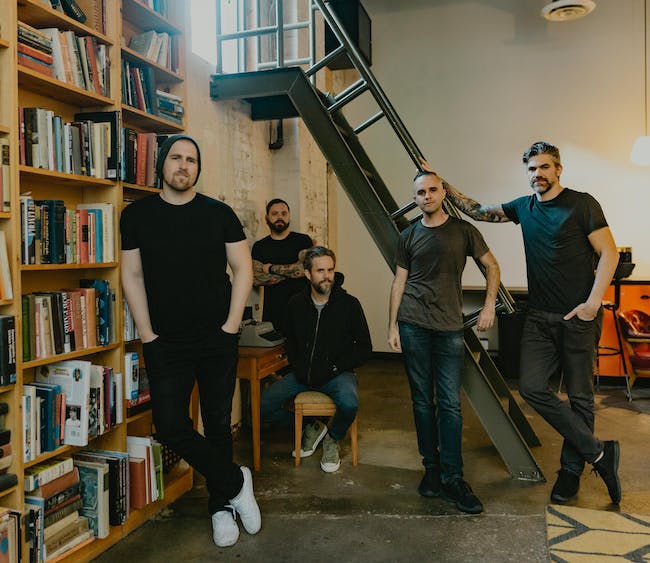 Between The Buried And Me

Time may move in a circle, but we pick up wisdom along the way. When we face similar situations further down the line, we’re armed with the experience to not only survive, but actually thrive. Between The Buried and Me built their influential 2007 album, Colors, on an unwavering commitment to artistic integrity. They’ve only fortified that commitment on its 2021 sequel, Colors II [Sumerian Records]. The circumstances surrounding both records bear key similarities, yet the North Carolina quintet—Tommy Rogers [lead vocals, keyboards], Paul Waggoner [lead and rhythm guitar, backing and lead vocals], Dustie Waring [rhythm and lead guitar], Blake Richardson [drums], and Dan Briggs [bass, keyboards]—once again stretch the boundaries of their signature sound and heavy music at large.

“Especially with 2020, we really wanted to give it all we could and show the world we’re still here,” explains Tommy. “That’s part of the reason we named it Colors II. We were in a similar spot when we did the first Colors. Back then, we had just gotten done with OZZfest. We were wondering, ‘Where do we belong in this music scene?’ We still struggle with that. At both of these moments in our career, we decided to just be ourselves and write the best album we can. We came out guns blazing, and I feel like it’s some of our most creative material in a long time.”

“Colors was very much our attempt at a do-or-die statement,” recalls Paul. “We had to establish our identity and be who we really wanted to be in order to have a career. This time around, our industry was shutdown for a year. Once tours were cancelled due to the Pandemic, we were like, ‘We’ve got to write a record, and it’s got to be good’. We had to do something next level.”

They did so with nearly 20 years of hard-earned experience behind them. Their fourth offering Colors represented the first in a series of high watermarks. It graced numerous tastemaker lists, including KERRANG!’s “The 21 Best U.S. Metalcore Albums of All Time,” Prog’s “The 100 Greatest Prog Albums of All Time,” ThoughtCo’s “Essential Progressive Metal Albums,” and Loudwire’s “Top 25 Progressive Metal Albums of All Time” and “Top 100 Hard Rock and Heavy Metal Albums of the 21st Century.” In its wake, 2015’s Coma Ecliptic opened at #12 on the Billboard Top 200 and received a perfect rating from The Guardian. During 2018, they unleashed the two-part Automata I and Automata II to further acclaim. Along the way, the group toured with everyone from Mastodon and Coheed and Cambria to Lamb of God and Devin Townsend in addition to selling out headline shows around the globe.

Throughout 2020, the band members wrote remotely before congregating in Winston-Salem, NC with longtime producer Jamie King. Instead of adhering to a conceptual thread, the conditions gave the concept meaning.

“Musically, it flows like a sequel to Colors, but it wasn’t just another version of that album,” Tommy goes on. “On the original, I was analyzing myself and analyzing humanity. With last year, I was in a perfect position to do that. I wrote lyrics in the same way, but they felt new. It was more of a real-world concept by virtue of making a continuation.”

They introduce the album with the pummeling single “Fix The Error.” Galloping thrash drums collides with a wah-ed bass solo and carnival-esque keys before launching into gritty verses. It twists and turns towards a hardcore chant punctuated by topsy-turvy vocals and mind-numbing fretboard fireworks underpinned by drum solos by an ironclad trifecta of Mike Portnoy, Navene Koperweis, and Ken Schalk.

“The intention was to write a metal song with a big gospel vibe,” smiles Tommy. “It turned into this monster. It’s a small story on the record about this guy who lives in a big apocalyptic city. He retires from his job, but he wants to take down this huge corporation. The song is a celebration of taking down corruption and saying, ‘Fuck you’, to the man. It’s about as punk as we’ll ever get.”

Meanwhile, the nine-minute “Revolution In Limbo” steamrolls through frenetic keys with fascinating guitar movements and a head-spinning vocal ebb-and-flow. “The songs are meant to flow in and out of each other like one big chunk of music, creating a seamless and chaotic musical journey,” the frontman observes.

Between The Buried and Me encode various “easter eggs” for fans of the original Colors inside of the opening salvo of “Monochrome” and “The Double Helix of Extinction,” while “Bad Habits” calls back to the lyrics of “Ants Of The Sky” with the line, “Sleep on…fly on.”

“There are a lot of fun nuggets,” Paul continues. “You’ll hear certain instrumental parts and lyrics that remind you of Colors. Everything comes full circle.”

In the end, Colors II sees Between The Buried and Me make a similar connection.

“Music’s purpose is to help,” Tommy eaves off. “That’s a big theme of this album. Once our songs are done, they belong to our listeners. Maybe this will help them move forward creatively or in life.”

“I hope audiences get a feeling similar to what they got when Colors came out,” Paul concludes. “This is a full 80-minute album experience. For years, fans have told us how much they loved Colors. I hope they feel the same way about Colors II.”