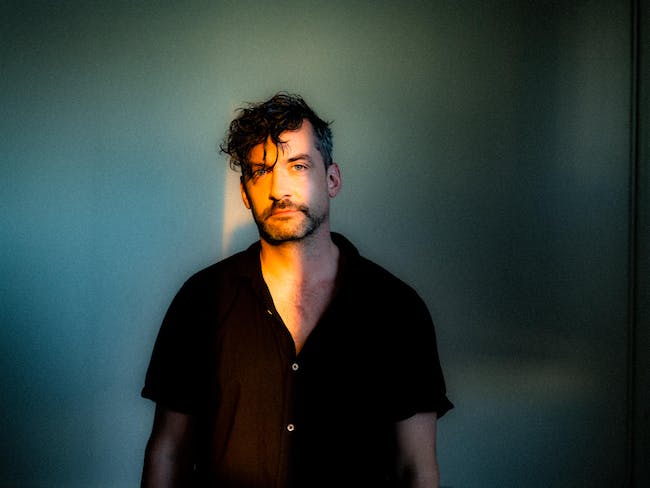 Fragments is a huge event, destined to be one of the crossover electronic records of the year, and it might very well be Bonobo's masterpiece. Certainly for Si Green, the man behind it all, it was the most emotionally intense record yet to create, and it shows. Its electronic sounds are more powerfully hypnotic, the beauty of acoustic instruments is more exquisitely realised, the two are interwoven more totally - and the songs are unforgettable. Its structures are full of tension and release on both an intimate and an elemental scale, it manages to touch on the most delicate and fleeting of emotions but also on existential terrors and an unabashed celebration of life in the face of fear and uncertainty. It's truly a record for our times. But there were times when it felt it would never happen: where previously Green had always written on the move, this time he had to fight to get it out, in isolation, as the world changed around him.

Of course these last few years have been a wild ride for everyone, but for Green, it was more a case of the rollercoaster suddenly stopping. It's now been over 20 years since he started Bonobo as a solo project, and over a decade since it expanded to include an arena-filling live band plus a parallel DJ and remixing schedule that puts Green up there with the biggest names in dance music. That expansion and acceleration has been constant, from a small town rural upbringing, through the small, funky clubs of Brighton on the English south coast, living in NYC then LA to working with Erykah Badu, Ólafur Arnalds and Jon Hopkins (plus remixes for Michael Kiwanuka, Gorillaz, George Fitzgerald and London Grammar). He has received three GRAMMY nominations, played huge arenas (selling out London’s Alexandra Palace three times, as well as Denver’s legendary Red Rock Amphitheatre, not to mention Glastonbury, Coachella, Lollapalooza, Primavera Sound and Fuji Rock) and most recently landing a top ten album in multiple countries, top five at home in the UK and a Billboard dance album number one in the US, with 2017's Migration.

This sounds dizzying, but the process of getting there was always so continuous, there was rarely any dramatic step change that made him take stock. His childhood was quietly cultured with his parents (his father a well regarded English folk musician) and sisters in Hampshire and Sussex. It was natural from there to gravitate to Sussex’s party capital Brighton, where his eclectic tastes matched with the funky and exploratory club scene of the mid 90s, DJing jazzy, soulful global and electronic sounds in funky basements. Releasing on Brighton’s own Tru Thoughts at the turn of the millennium led to signing to Ninja Tune, which gave him a global profile and let him build up a live band. And on it went... each step was logical and organic.

But as Green embarked on the Migration tour – during which he and the band would play to two million people – this constant acceleration combined with a feeling of the world in flux provided a feeling of uncertainty. He recalls the album dropping just as Trump took office in January 2017: heading to LAX for the start of the tour he saw it surrounded by protestors against the new travel ban. “It was deeply strange,” he says, “There was very much a feeling of ‘Oh well, here we go – off into a weird new world’, not even knowing if we’d be allowed to come back.” And touring was becoming gruelling. He had not long before had to deal with both his parents' passing, and that sense of “the madness intensifying out there in the world, especially in North America in that summer of 2017 – it all got a bit much. I had a bit of a moment.” He started to pull back into himself – where previously he'd enjoyed and taken inspiration from the endless transit and crowds, now he felt like the constant cycle of cities and stop-offs was stifling. For the first time, crucially, he wasn’t writing new music as he travelled.

And this sense of everything shifting and unravelling didn’t abate when he got back: he arrived home after two years touring to find California on fire, and then the pandemic hit. His only way of processing this was to spend time in nature. Already on tour, he’d begun to take the scenic route. While the tour bus rolled on, he'd drive alone, and between cities “find the places that were alien and unique and awe inspiring, and just be there for a while, take pictures, get weird and be feral for a few days - I'd literally walk into the venue to soundcheck in my muddy hiking boots.” This continued: in 2020, his only escape from confinement was to go camping. He’d take a Jeep out into the Californian desert – one time inadvertently visiting Death Valley on the hottest day in its history. With the temperature hitting 54.4°C, he found himself genuinely fearing he might not make it back to his vehicle, encountering a rattlesnake didn’t help either.

Exhausted and wrung-out, Green was wrestling with feelings he found hard to express. He was unable to get home to the UK – where formerly he’d been back and forth regularly – but his vivid experience of heat and news footage of fires raging in California made him realise “the place I call home now might not be viable for life in the near future.” The real and present danger of climate change was suddenly unavoidable. Yet at the same time, his abiding memories of the sheer scale of Canadian mountain ranges – on tour, he’d driven solo through landscapes uninhabited for hundreds of miles – was a reminder that life goes on, that nature is much bigger than any of us. Maybe in the green Utah valleys he camped in to escape the US election fever – because as a Brit he couldn’t vote – he was harking back to his upbringing in rural England, yearning for the giddy innocence of teenagers drinking round bonfires. All of this was weighing on him: but with the need to make a new album looming, he was still struggling to get his ideas out.

The emergence of what would become Fragments from Green's psychic blank canvas came in phases. First was setting banks of modular synths in motion during lockdown in 2020. At first this was a diversion “from just pushing a kickdrum around on a computer screen, going off, making a cup of tea, then pushing it round some more” – but then he became addicted to the complex undulations of sound that came from the machines. The fact that “it was chaotic but you could exert some degree of control over just how chaotic it should be” resonated with his deep feelings about elemental threats and human frailty: it was a way of interfacing with them and expressing them sonically. Also around this time, he dug out some recordings he'd made of harpist Lara Somogyi just pre-COVID, and found that these also fit his mindset.

The flowing, rippling tones of the modular synths and the harp working together set the tone of fluidity and cyclical patterns. Working with arranger and string player Miguel Atwood-Ferguson, musical themes began to rise out of the unconscious jamming and sample manipulation – and recording orchestral musicians in actual studios helped bring the songs “out of the box” and into real, physical space. A rhythmic framework started to come together too: the structures of UK bass music and rave began to seep into beats that would become tracks like “Otomo” and “Sapien”, some of the most hip-shaking grooves he's ever made. This was because Green, unable to return to the UK because of COVID and Visa issues, was obsessively listening to radio and DJ sets from back home and picking up on the future-retro rave, jungle and UK garage sounds he was hearing. Of course he retained his own connections to the UK scene – notably overseeing the first in the prestigious fabric Presents DJ mix series in 2019, and launching his own dance-focused label OUTLIER in late 2020, writing a radio smash together with fellow Brit Totally Enormous Extinct Dinosaurs (and later signing Damon Albarn protege Poté).

Still, though, this wasn't a complete record yet. There were musical and psychological themes, but it wasn’t connected, and – aside from the "old school, Detroity, Moodymann and Theo Parrish inspired” “Shadows,” recorded with friend Jordan Rakei – there weren't songs. Once COVID hit, the vocalists Green reached out to, it seems, were struggling as much with creative block as he was. But finally, well into 2020, “right at the end when I thought everything was off the table, and I'd ground to a halt”, Chicagoan singer and poet Jamila Woods sent back her vocal parts.

Green listened to the vocal back in the studio after an evening out and it was a magic moment. The last creative blocks dissolved: “I knew I had a centrepiece for the album, I knew how it was all going to sound”. The track became “Tides”, and all of the themes of ebb and flow, of the cycles of nature, of the inexorable nature of the elements fell into place around it. That moment became a figurative turning of the tide. The US was opening up from lockdown, and other vocals started coming in thick and fast, bringing new collaborative energy to the album. O'Flynn's co-production contribution on “Otomo” - he effectively remixed it, turning Green’s sample of the haunting Bulgarian choir 100 Kaba-Gaidi into a dramatic breakdown and beat drop – also gave the process a boost, reminding Green of the sense of dancefloor abandon and surging crowds that by now he missed with a burning passion.

So the album is the sound of both struggle and isolation – personally and collectively – and of a surging, joyous return. This falling-together of elements was rapid, and a huge relief, coinciding with a return to socialising and a return to dancing. While there is sorrow and introspection here – see the beautiful melancholy of Joji's voice and the dense textures of the ballad “From You” - there is just as much a sense of release, of going with the flow and freedom. It's about the dancefloor in many ways, about how “I remembered all over again how much I loved crowds and movement and people connecting with each other” – but the positivity isn’t just in the uptempo rhythms: even the most introspective and melancholic pieces have joy in them.

The beatless “Elysian,” which follows “Tides,” lets the fluidity of Somogyi's harp and Atwood-Ferguson's strings flow over the listener, enveloping you in bliss. And another ballad, the closing “Day by Day” with Kadhja Bonet – the only vocal recorded in an in-person session – glows with hope, with the sense that despite it all life goes on, and that even in small ways, individual action matters. Drawing all the threads together is the single “Rosewood” – another nod to Detroit house, with a feeling of both celebration and a deep yearning, it both harks back to the small jazz, funk and soul clubs where Green cut his teeth but has the epic scale of the biggest festival stages too. Fragments isn't just a musical salve – far from it, it has pain and fear and struggle shot through it – but it is a gorgeous reminder of of how out of struggle and disillusionment, creativity and hope can emerge at the most unexpected moments.