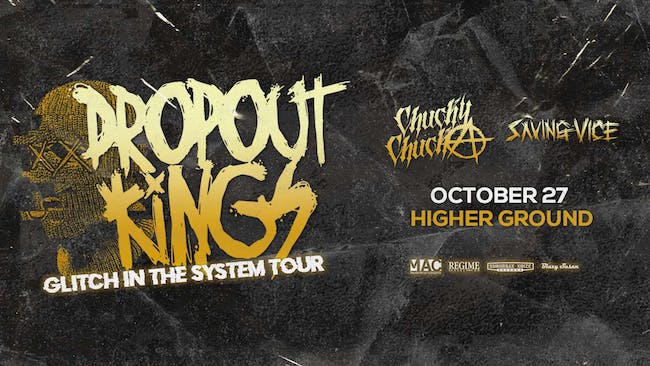 Glitch In The System Tour

Dropout Kings are a generational evolution of rap infused rock bands such as Linkin Park and Limp Bizkit, fusing together heavy metal sounds with the progressive rhythms of hip hop and trap music. Dubbing it as ‘Trap Metal’, DOK prides themselves on pioneering and molding the genre, crafting unique soundscapes that feel familiar yet fresh and innovative.

Songs like ‘Scratch & Claw’ feature impactful and introspective rap lyrics and haunting yet passionate vocals over polished, metal inspired, instrumentation, while ‘Going Rogue’ pushes the creative threshold of what a band can excel to be. Dropout Kings, formed in 2016, have already garnered millions of streams from their debut album, AudioDope, which was released August 10th, 2018 through Napalm Records. The group signed to the label before they even performed their first concert, confirming the band’s raw talent and creative fortitude. AudioDope went on to receive rave reviews, being herald for it’s refreshing yet nostalgic sound while blurring the lines between rock and hip hop. In 2019, Dropout Kings signed to Stay Sick Recordings and released the GlitchGang EP. In 2021, DOK signed with Suburban Noize Records and re-released the GlitchGang EP, only further cementing them as a force to be reckoned with. With their latest release and more tours on the way, it is clear that Dropout Kings are on a quest to make the world hear their story.