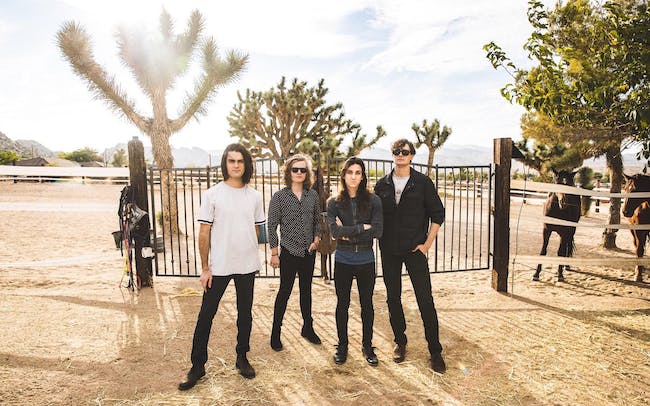 The Lonely Ones, Frame 42

A gritty howl opens Joyous Wolf's upcoming debut LP, Enigma, and it's the perfect introduction since the band plays rock & roll at its most primal and passionate. Guitarist Blake Allard's bluesy riffs harken back to the classic hard rock of AC/DC, Cream and Deep Purple while still packing a thoroughly modern wallop, while frontman Nick Reese's voice seems to come from deep in his gut as he sings about everything from warring kingdoms to a tribute to a fallen friend. Together, with bassist Greg Braccio and drummer Robert Sodaro, Joyous Wolf's members work together to create some of the most exciting, promising and unwieldy back-to-basics rock to come out of Southern California in recent years.

Whether nimbly navigating the swaggering, powerful groove of their go-to concert opener, "Mountain Man," or digging into their instruments for a jammy, funky guitar solo "Major Headthrob," the group has an unpredictable quality – a sort of unique freedom within rock & roll – that makes Enigma compelling. Part of the credit for this goes to producer Val Garay (Santana, Neil Diamond, Reel Big Fish) who came aboard at the last minute to help them achieve the record's raw sound, which captures how Joyous Wolf sound live. But mostly, the electric feeling that defines Enigma is just something in the band's DNA.

"When I'm playing rock & roll, it's the only time where I feel indestructible," Reese says. "When I heard Elvis sing 'Heartbreak Hotel' for the first time, I knew exactly what my heart wanted and what I wanted."

"I think people are starting to realize the overproduction and fakeness of pop music, which is why rock is coming back," Allard says. "We love being a rock band." Joyous Wolf formed in November 2014, but their roots stretch back to sixth grade when Reese first crossed paths with Sodaro by fate – they had to assemble next to each other because their names were alphabetically side-by-side. Reese recalls a middle-school battle of the bands where neither he nor Sodaro was playing, but Reese declared that one day he was going to be "the best singer ever" and that Sodaro would play drums. It would take a few years, but after stints where both musicians duked it out playing in punk and alternative bands ("all of that crap," Reese adds) they fulfilled Reese's prophecy. The singer drafted Allard, whom he'd met randomly in the acoustic room at a Guitar Center when the two jammed on CCR's "Born on the Bayou," and Sodaro brought in his high-school friend Braccio to play bass.

Before long, the quartet was jamming in Sodaro's folks' garage, annoying the neighbors and entertaining the local authorities. "Once on Halloween, we were rehearsing at 11 p.m. writing songs, and we faced Nick's monitors out the window toward a canyon full of houses," Allard recalls. "Then we saw this car at the front gate, and it's the sheriff. He comes into the practice room and goes, 'Hey guys, I hate to shut you down because it sounds really good, but we got a complaint from across the canyon that it was too loud.' We still practice but not like that anymore."

One of the first songs they played together was "Sleep Weep Stomp," Enigma's slow-burning, sludgy blues burner. It's the style of music that Reese feels closest to. "I'm a blues singer, 100 percent," he says. "That's my everything." The singer grew up on blues, jazz, and Fifties rock & roll. "When my dad showed me, Elvis, that was the end of it," he says. "I needed to hear every artist that inspired Elvis and then the people who inspired them. Suddenly I had a record collection. It all felt natural: B.B. King made me want to scream my pain away. You hear all these people and you want to express all the things you love. I don't care if people think it's old or not current. It doesn't matter to me." By his own estimation, he didn't hear anything "current" until he was 13 and borrowed his sister's Discman only to hear the Strokes' "Is This It". Similarly, Allard was raised on classic rock. "My dad taught me my first song ever, 'Sunshine of Your Love,' by Cream," he says. "I always went back to that kind of old blues-rock music. Even if I was into metal or hard rock, I always went back to the classics like B.B. King, Jimi Hendrix, Black Sabbath, and Led Zeppelin."

These influences shine through on Enigma. "Killing the Messenger" begins with some crushing classic heavy-metal riffs before giving way to a boogieing verse riff where Sodaro and Braccio can bash out their rhythms freely while Reese yowls a tale about two warring kingdoms, and how an evil monarch tricks one of his most popular subjects into delivering a nasty message to the other kingdom only so he would be executed. Reese says the moral Is "life isn't fair and it isn't always a happy ending." The beat-heavy "Mountain Man," whose lyrics lambaste one of Reese's former less-than-refined coworkers at a coffee shop, whom the singer says claimed he could "carve a knife out of the tree," began with a guitar riff that was so forceful that the band couldn't deny its power. "He had this little riff and we were laughing because it was so stupid-simple," Reese says. "And it is. It's our quote-unquote 'dumbest song,' but when we used it to open at the Viper Room, the audience response became one of our staple songs."

The band is also able to channel more somber tones. The acoustic "Remember By" showcases thoughtful performances by both Allard and Reese, who wrote the song in tribute to a friend of his who had taken his own life. It came from a moment of pure inspiration. "I recorded us when we were fooling around, and it was perfect," Reese says. "I pushed for us to record that song so hard. I said, 'Please do it exactly like you did it. Please.' That was me saying goodbye."After they put out their Daisy EP in late 2015, it took the band about two years total to fine-tune and perfect Enigma. And while songwriting was a big chunk of that (the ominous riff for "Turning Blue" took them six months to perfect), they went through several passes of mixing and mastering it to get it to sound like it does. When Garay finally came aboard, they were able to establish the right mixture of nuance and directness. "It's so much more animal," Reese says, using the perfect adjective, to describe the way Enigma turned out. That "animal" sound has earned Joyous Wolf some notable gigs, including performances at L.A.'s famed Whisky a Go-Go, the Viper Room and the Regent Theater, where they recently opened for Eagles of Death Metal. Now they're ready to move on to even bigger stages. "When we play a show, we go out and we kick ass," Reese says, sounding confident. “We’re headhunters”. Headhunting on the road will now be even easier, with their upcoming record Enigma, an album that demonstrates what Reese calls Joyous Wolf's "mojo." - Kory Grow Rolling Stone Magazine 2017