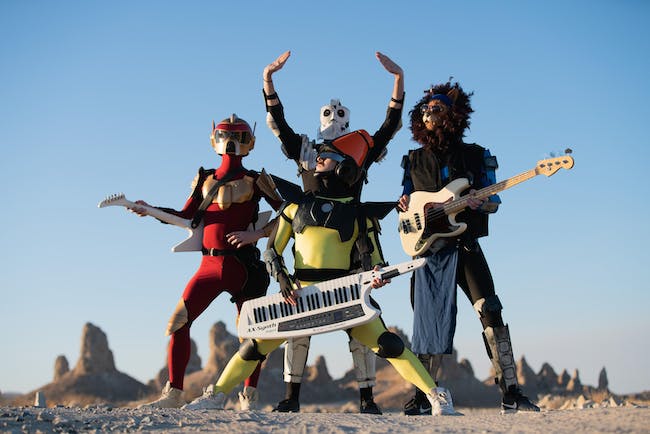 The sound of the future as imagined in the 1980s. The nostalgic theme song to your favourite childhood cartoon that may have never existed. The hopefulness of someone from the future describing the utopia of tomorrow. Like a paradox of time travel, TWRP is all of these things and yet none of them.

This optimistic fascination with the future, grounded in the nostalgia of the past, is what has shaped TWRP. They are the product of many eclectic styles and eras, crafted into something simultaneously playful, heartfelt, and tongue-in-cheek, all delivered with self-aware bombast and an uncommon musical precision. Old funk, modern electronic, and classic rock converge in their science fiction universe, as if Earth, Wind & Fire, Justice, and Yes provided the soundtrack to a Dune movie that was actually good.

The cruelest irony of life is that we never feel more alive than when we’re staring down death. In those precarious moments, every fabric of your being is cranked up to 11: the uncontrolably pounding heart, the dizzy head, the fight-or-flight adrenaline rush that courses through your entire body. But even if you’re fortunate enough to have never endured a near-death experience, you’re well familiar with all those feelings—because they just so happen to be the very same physical sensations that overcome us when we’re approaching euphoria. (Not for nothing did the French nickname orgasms “la petite mort”—i.e., “the little death.”)

Since releasing his first EP in 2007, Rich Aucoin has made it his life’s work to transform ourfear into fun, anxiety into ecstasy, panic into pleasure. A mad DayGlo-pop scientist in thetradition of Brian Wilson, Wayne Coyne, and Dan Snaith, Rich is the sort of artist who has notime for half measures, utilizing all the resources and connections at his disposal to ensure his every gesture is a Major Event. To wit, his first proper album, 2011’s We’re All Dying to Live , was a 22-track orchestro-rock magnum opus that, once you factor in the numerous choirs on hand, featured over 5 00 collaborators. But making music is only half the story with Rich—each of his releases to date have been constructed in tandem with companion films made up of classic movies and public-domain footage that are meticulously edited by Rich himself to sync up perfectly with his songs. And those visuals form the backdrop to anow-legendary live spectacle that is less a rock concert than a secular big-tent revival, uniting congregations under giant rainbow parachutes and thunderclouds of confetti. At any given Rich Aucoin gig, there’s only one person in the room whose face isn’t frozen in a perma-smile: the poor bastard on staff who’ll eventually have to clean up a post-show scene that resembles a bombed-out party-favor store.

Rich’s sensory-overloading, synapse-bursting shows were initially a natural outgrowth ofadapting W e’re All Dying to Live’ s grandiose studio creations to live setting—a savvy means of distracting you from the fact that Rich was more likely to be performing with just five people rather than 500. For his 2014 follow-up, Ephemeral , Rich deliberately designed the songs to amplify that onstage energy, yielding a bounty of frenetic, electro-pumped motivational anthems powered by mass, call-and-response sing-alongs. But his latest, long-gestating masterwork, Release , was born from a more insular, existential mindset. Pieced together over the course of three years, across five cities in 16 studios with 70-plus collaborators and over a hundred instruments, Release presents Rich’s most musically elaborate, fully realized vision to date—which is saying a helluva lot, given his maximalist track record. If Ephemeral was a ceaseless strobe-light flicker of a record, Release is more a lava lamp—a record of slow-building, surprising mutations that invite more subjective interpretations.