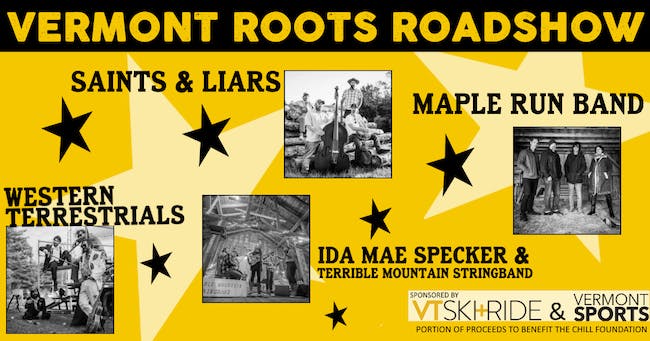 A showcase featuring performances by Vermont acts Ida Mae Specker and Terrible Mountain Stringband, Maple Run Band, Saints & Liars, and Western Terrestrials. A celebration of the Green Mountain State’s legacy of traditional and original music, the concert will offer Vermonters an opportunity to gather, celebrate, sing, and dance together again.

The shows are sponsored in part by Vermont Ski+Ride and Vermont Sports (https://vtskiandride.com), and a portion of the proceeds will go towards Chill (www.chill.org), a non-profit founded by Donna and Jake Carpenter supporting youth development programs.

Honky-tonk outsiders Western Terrestrials blend their love for the weird with the twang of classic country, creating a sound that’s honest, irreverent, and upfront about what they believe in. Their second album Back in the Saddle of a Fever Dream captures them in all their contradictory glory. Earning praise as an unconventional new voice on the country scene, the album was produced by Dean Miller, son of Roger Miller, and features a duet with Georgette Jones, daughter of Tammy Wynette and George Jones. It reached #11 on the Alt Country Specialty Chart, won a Times Argus Tammie award for Best Country Album, and earned them a spot as featured artists on the legendary WSM radio station. The album also includes a song co-written with Ketch Secor of Old Crow Medicine Show, “Ethan Alien,” which Western Terrestrials are turning into a feature film, a honky-tonk space opera out in August, 2021.

Ida Mae Specker and Terrible Mountain Stringband fuse original and traditional material, bringing heartfelt new life and relevance to the chain of American folk music. Third generation fiddle players, Ida Mae and Lila Specker were born in a one-room cabin at the foot of Terrible Mountain in Andover, Vermont. Together with Josh Norman on guitar, vocals and percussion, Lila and Ida Mae formed Terrible Mountain Stringband in 2017. They are joined by multi-instrumentalist Miller Nuttle on banjo and virtuoso Mowgli Giannitti on bass. Playing a blend of Ida Mae’s recently released originals and old-time fiddle tunes, the band pays homage to the past while continuously evolving their unique sound.

Saints & Liars is a four-piece Americana group from Southern Vermont, blending their own variants of honky tonk, folk, bluegrass, and rock n roll. They’ve become known as “Vermont’s roadhouse roots band”, having thrived in such venues throughout New England since 2012. Members include, Jed Hughes [guitars, lead vocals], Mike Farkas [guitars, vocals], Chris Rogers [bass], and Nolan Rolnick [drums]. The group remained a live performance driven band until late 2020, when they decided to record their first studio album, entitled ‘These Times’. Influenced by social distancing, and without the opportunity to continue playing frequent shows as they always have, the band took to the recording studio in an effort to find a sense of normalcy and relieve their pent-up creative energy. Wildly fun and refreshingly raw, Saints & Liars aim to entertain. Dance. Stomp. Sing along.